By many measures, 2016 was an eventful year, to say the least, for Americans. From one of the most inspiring Olympics on record to a contentious presidential election season, many are exhausted and looking forward to a fresh start in 2017. Using this year of extremes as a backdrop, ThinkNow Research conducted its fourth annual Consumer Sentiment Study across a representative sample of Hispanics, African-Americans, Asians, and non-Hispanic whites. Below are insights gleaned from this year’s ThinkNow Pulse™ Consumer Sentiment study.

This year, 2016, showed signs of a recovering economy for minorities. The Census Bureau’s report on income, poverty, and health insurance coverage in 2015 shows a significant increase in median income for Hispanics and African-Americans for the first time in many years. This boost was reflected in our study when we asked – “Thinking of all of the sources of income that contribute to your household, compared to this same time last year, would you say your household financial situation has”: 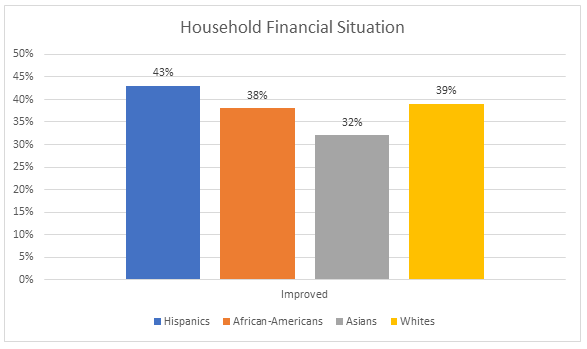 Hispanics top the list in citing that their household financial situation has improved since this time last year at 43%. Whites and African-Americans are a close second and third at 39% and 38%, respectively.

Heading into 2017 with this uptick in their current financial situation, Hispanics are feeling good about their personal/family finances. When asked – “Thinking of your own personal and your family finances for 2017, which of the following would you say best describes your feelings towards this upcoming year?” : 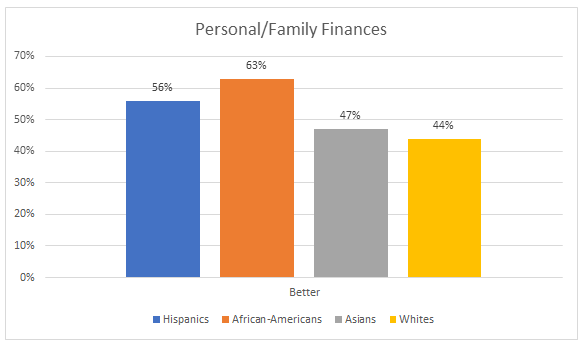 So, we’ve established that Hispanics are making money and feeling good about 2017…now for the good stuff: WHAT are they buying? When asked – “Thinking about major purchases that people might buy for themselves or their family, are you planning on buying a ____ in the next 12 months”: 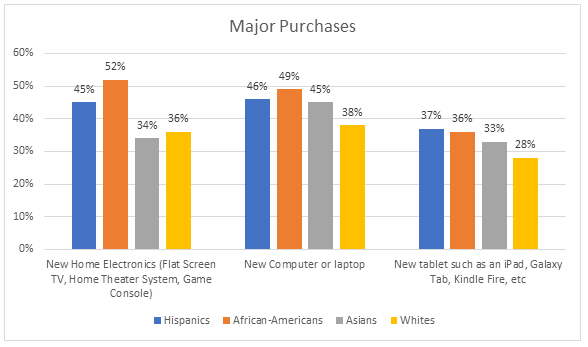 Electronics are the top three major purchases Hispanics are looking to pull the trigger on in 2017 with Computer/Laptops in the lead followed by home electronics, and then tablets. African-Americans are significantly more likely to purchase new home electronics in 2017 than Whites and Asians.

Coming out of a whirlwind election year, it’s easy to forget how resilient consumers are. The economy has been on an upward albeit slow trajectory, as signified by rising incomes for minorities and improving sentiment.

In fact, our consumer sentiment data points to a consumer base that is feeling good about the future and are ready to spend. Progressive brands – like Tecate with their message of positivity – can turn the aftermath of such a tumultuous year into a big win by creating marketing campaigns that target cross-cultural consumers and sharing inspirational brand stories about products and services that meet their needs, ultimately driving sales and loyalty for the brand.