Education is often touted as a means of “balancing the playing field” and stimulating socio-economic mobility. However, lower educational attainment levels among most racial minorities in the U.S. have been the norm since college attendance expanded into the middle class following WWII. While college attendance has increased for Hispanics and African Americans in the past couple decades, it still trails that of non-Hispanic Whites.

Currently about 16% of U.S. Hispanics and 23% of African Americans aged 25 or older have Bachelor’s degrees which is significantly higher than it was a decade ago. But despite the progress, these gains pale in comparison to the 33% of non-Hispanic Whites who have achieved that goal and the 54% of Asians with 4-year college degrees or higher.

Gen Z will be the most educated generation in history.

Each generation has a chance to make its mark in the world. The Greatest Generation won WWII, Baby Boomers fought for civil rights, Gen X changed the world through the adoption of new technology and Millennials are ushering in a new era of equality for gender and gender identity. That brings us to Gen Z. While still young, born post 1995, it’s the largest generational group in the U.S. making up 25% of the population and the most racially diverse with nearly half its members falling into a racial category other than non-Hispanic White. They will also be the most educated generation in U.S. History. According to our recent We Are Gen Z report which surveyed 1,265 Gen Z members between the ages of 14-21, it may also be the first generation to close the racial education gap. 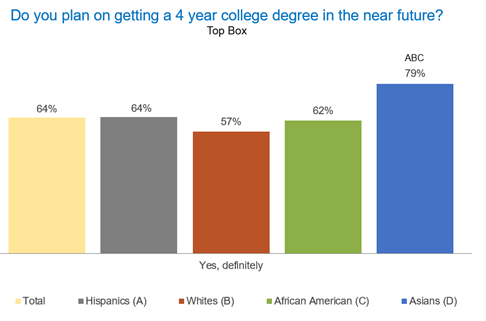 Graduation from college is an indicator of success.

The desire for a 4-year college degree, of course, is not the same thing as achieving that goal and there are many obstacles in the way for minority students, especially those from low-income families. But, the message has been received loud and clear by this generation that college is must. There was a time in the U.S. when minority students were less likely to set their sights on higher education than non-Hispanic Whites. That has changed. When asked if graduating from college was an indicator of success, Hispanic and African American Gen Z respondents indicated it was at higher levels than other groups. In fact, Hispanic Gen Z members feel considerably more positive about college than Hispanic Millennials who were surveyed during the Hispanic Millennial Project.

Gen Z is not stopping at Bachelor’s degrees. Just over half of them plan to continue their education to earn a Graduate degree. Again, all minority ethnic groups have this as a goal at higher rates (percentages in the mid-to-high 50’s) than non-Hispanic Whites (44%). Even if we assume some Hispanic and African American students will fall short of their goal, it’s heartening to see the intent numbers to be as high as they are.

Lastly, the current population of students in college skews female with women making up approximately 55% of enrolled students. This trend started in the 90’s and shows no signs of abating. Fifty-five percent of Gen Z girls are already looking past Bachelor’s degrees and aiming for Graduate degrees vs. 51% of Gen Z boys. There is an interesting dynamic, however, when we look at interest in Graduate degrees by race and gender. While Hispanic and Asian young men are more interested in getting a Graduate degree in the future than young women, the reverse is true for non-Hispanic Whites and African Americans. 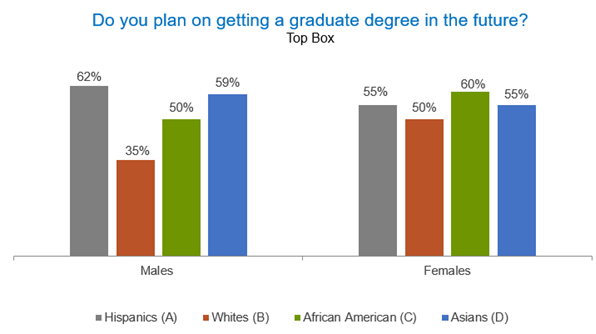 Gen Z is up to the challenge.

Time will tell if Hispanic and African American college graduation rates will equal those of non-Hispanic Whites and if female educational attainment will translate into pay equity and entry into higher management positions. Gen Z, however, has a better opportunity to make these changes than any generation in U.S. history and appears to be up to the challenge.