There was a time when nearly all U.S. Hispanics could be found in the West and Southwest. Now, the fastest growing Hispanic populations are in North Carolina and Georgia. Midwestern States, such as Iowa, have experienced triple-digit Hispanic population growth over the past fifteen years. In market research, we often use someone’s inherited race and culture as a way of predicting their preferences and behaviors. Does this approach still have value at a time when cultural groups are now dispersed across the country? Are Latinos in Chicago more like other Chicagoans or more similar to their cultural cohorts in Los Angeles? Does the need to fit into a new city trump inherited culture? Let's look at some research to get the answers.

Family tops the list among elements that define Hispanic culture.

Late last year we conducted a study that asked a nationally representative sample of Hispanic, non-Hispanic White, African American and Asian respondents how they defined culture. Specifically, we had respondents rank key cultural elements, Family, Values, Religion, Music, Food, Cultural Traditions, Language, and Art, by the degree to which these elements defined culture. It was not surprising to find that on a national level, Hispanics ranked “family” as the #1 element that best defines culture by a statistically significant margin compared to other ethnic groups. 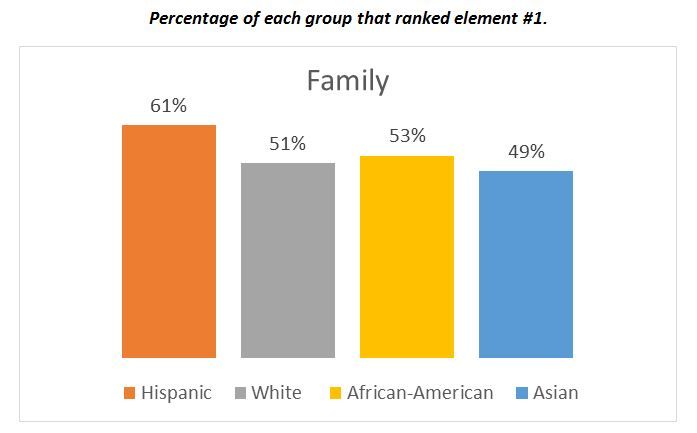 Hispanic family affinity is so engrained in Hispanic market research that it has become a cliché. One, however, that is true. But is it equally true for Hispanics living in different parts of the country? Here’s how the above chart looks for Hispanics in the four main Census regions: 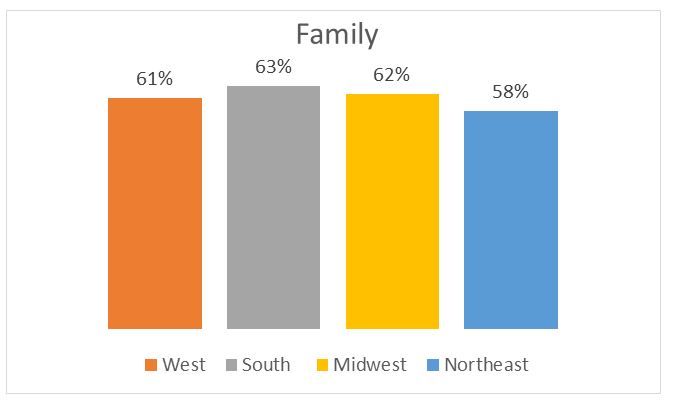 While Hispanics in Chicago may incorporate some cultural elements from the Windy City, such as rooting for the Cubs (Los Cachorros) or enjoying Vienna Beef Dogs, their adherence to Hispanic cultural norms is surprisingly similar across Census regions. Hispanic culture is astoundingly resilient and maintains its core values even in very different parts of the country. Latinos in the U.S. come from over 20 countries, and most identify with their country of origin over being Latino.  But there does appear to be a national Hispanic identity that unifies U.S. Hispanics.

Country of Origin has a small impact on the definition of culture.

To be sure, there are some differences among U.S. Hispanics based on Country of Origin. For example, only 1% of Mexican origin Hispanics rank “language” as the most important determinant of culture whereas 5% of Non-Mexican Hispanics rank it first. Six percent of Mexican-Origin Hispanics consider shared “Values” to be the #1 determinant of culture as compared to only 2% of non-Mexican Hispanics. These differences, however, are small. Nothing comes close to matching the importance all U.S. Hispanics place on “Family.” 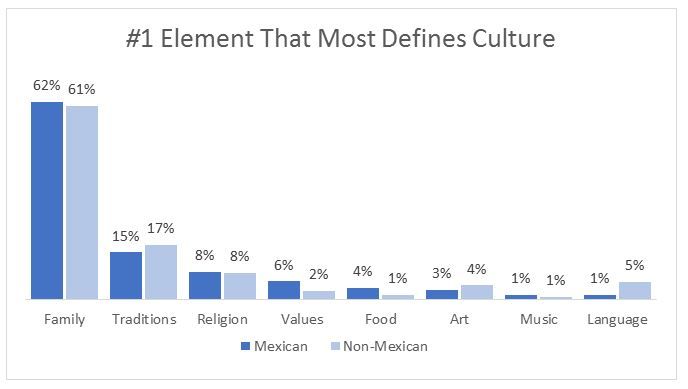 What Does This Mean for Hispanic Marketing Campaigns?

As one of the traditional “Hispanic Cultural Values”, family has been used extensively in U.S. Hispanic advertising. So much so that throwing an “abuelita” into Hispanic advertising has become a cliché that most ad agencies now would shy away from. This doesn’t mean, however, that the strong feelings U.S. Hispanics share about the importance of family unity as the defining characteristic of their culture can be ignored. Acknowledging something as a fact and pandering are two different things.

The concept of family is as important as ever. But clichés like “abuelita” are fading as the definition of family evolves to accommodate changes in the larger society such as lower marriage rates, same-sex parents, fewer children, and the like. Marketers should invest a little more time and energy in discovering the new “abuelita” that will resonate with Hispanic audiences. Latinos, like all people, want to see their reality reflected in advertising in a way that feels authentic, relevant, and emotionally compelling.