ThinkNow Mobile App Report: Why Brands Are Turning Back To Mobile Apps

Mobile apps are experiencing a retail renaissance. Nike’s revenue has done a complete 180 this year, showing one of their strongest quarters in the past decade,driven primarily by their new mobile strategy which leveled up its mobile app to include gamification features. Starbucks’ mobile app has transformed the way coffee lovers order and pay for their favorite brews, and McDonalds’ new mobile app strategy has managed to appeal to younger consumers and lower labor costs. For a technology that’s showing its age (apps have been around for a decade now), it’s exciting to see a renewed interest in it by retailers and brands, despite a string of headlines alluding to “the death of the mobile app.”

In our 4th edition of ThinkNow Mobile, we look at mobile app usage across the total market, seeking generational, ethnic, and gender differences in app usage that will assist marketers in their quest to create bespoke marketing campaigns.

Below are a few highlights from ThinkNow Mobile:

How many apps do you have on your phone or tablet? Perhaps you just downloaded Starbucks or Nike after reading about how cool they are, or McDonald’s because they’re giving away free fries to app users. People have an average of 30 apps across all devices:

But seriously, 30? Are these 30 apps the same 30 apps they first downloaded? Absolutely not. Most mobile device owners download a new app at least once a month. When you drill down further into generational groups, the app churn is even higher. Teens and Millennials are the most active in terms of downloading and deleting apps:

Most Popular Types of Apps Downloaded

So, what are people downloading so often? Social networking apps are the most commonly downloaded. Apps for weather, map/navigation/search, and games are also popular.Several app categories are more popular with women than men including social networking, shopping,and health/fitness: 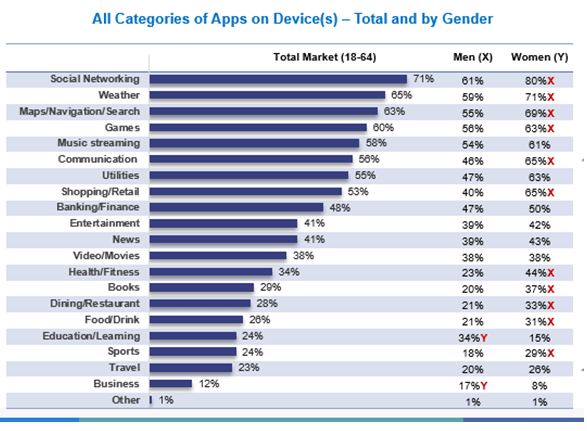 The types of apps that people have on their devices differ by age group as well.

Tablets are often forgotten when we think of mobile strategies, but tablets are alive and well. Almost 60% of the total market owns tablets. We see some interesting statistics when we break out mobile and tablet ownership by different demographic points. For example: 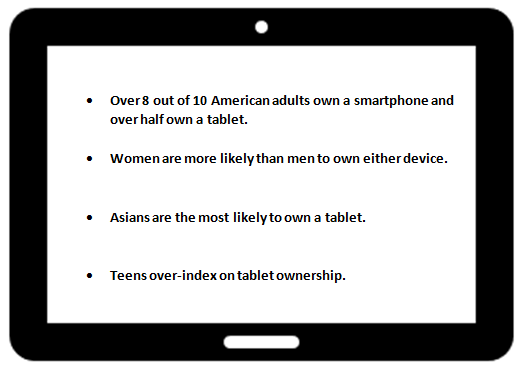 Mobile app usage is hotter than ever, but it’s those brands and retailers that clearly define their audience generationally, ethnically, and from a gender perspective that makes it into the 30 app club. The mobile phone has become an extension of oneself and adding an app is like adding a new dimension to your everyday life. Clearly defining your target consumer and having a complete understanding of what they value most is key to launching and maintaining a successful mobile app… and avoiding the trash bin!

For more tips on how to make your mobile strategy stand out, download our full report here.