In downtown Atlanta last week, a conference convened in which the companies represented affect all aspects of survey data, a fact that is significant as most marketers now rely on some sort of first-party data, the majority of which is gathered through surveys. SampleCon represents the entire ecosystem of the sample industry from panel research companies to incentive companies and is the only conference focused entirely on respondent sampling. The agenda reflected the conference’s broader vision with presentations ranging from how to use AI to serve the correct survey to the correct respondent to the growing opportunity for cannabis research. However, the choice to have the conference close with a presentation titled, “The Future of Sample Is Multicultural” speaks volumes to how the 2020 Census will further highlight the importance of multicultural sample in 2020.

What Is Multicultural Sample?

Why is Multicultural Sample Important?

Census population projections confirm the importance of multicultural consumers as the primary demographic engine of the nation’s current and future growth, countering an aging, slow-growing and soon to be declining non-Hispanic White population. Census statistics project that the nation will become “minority white” in 2045.

The shift is the result of two trends. First, between 2018 and 2060, gains will continue in multicultural populations, growing by 74 percent. Second, the aging white population will see modest growth through 2024 and then experience a long-term decline through 2060, a consequence of more deaths than births.

Because minorities as a group are younger on average than Whites, the minority White tipping point comes earlier for younger age groups. As shown below, the new census projections indicate that for youth under 18–the post-millennial population–minorities will outnumber whites in 2020. For those aged 18-29, the tipping point will occur in 2027. 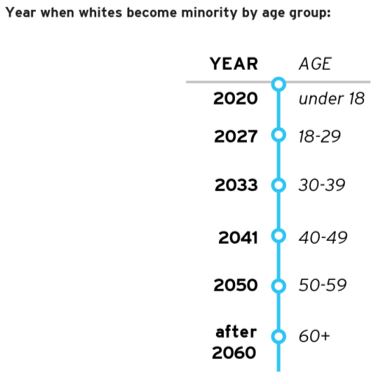 In a recent study analyzing respondent behaviors across ethnic cohorts, data shows that respondents from different cultural backgrounds take surveys for different reasons. Incorporating these insights into your sample strategy is critical for creating a representative sample that includes a large base size of multicultural consumers.

As the U.S. marches steadily towards a minority-majority country, we must reflect on the implications of not properly engaging multicultural respondents. As we have discovered in recent political polling, for example, excluding certain groups can lead to inaccurate data which can have a profound impact not only in the context of marketing but also on public policy.