How to Create and Measure Successful Multicultural Marketing

Corporate spend on multicultural marketing is expected to grow in 2022. Some of that budget is likely motivated by a long overdue cultural reconning with racial injustice, and some of it boils down to simple demographic realities. The 2020 Census revealed that the non-Hispanic White population shrank in real numbers for the first time in U.S. history. Minorities accounted for all the population growth over the past decade. Our consumer economy is becoming ever more reliant on multicultural spend, and those consumers expect to see themselves reflected in the media.

However, the increased spend will only be effective if it is sustained. The advertising landscape is littered with short-lived multicultural efforts that were abandoned before they could bear fruit. Much like a political party that wants to win over a key voting bloc, it’s important to have consistent communication with your multicultural consumers, not just when it’s a leader’s passion project.

No marketing campaign should start without first establishing what the “before” looks like. That picture may be a bit fuzzy when it comes to multicultural consumers. Google Analytics and its alternatives provide data on website traffic for online campaigns. But demographic data will only be available for users that allow third-party cookies, and it won’t be there at all if they visit your website on Safari or Firefox.

As cookies fall by the wayside, CRM’s are taking their place. This is a good thing since it’s forcing companies to be more intentional about data collection. If internal customer data isn’t gathering multicultural information, it’s time to start capturing it. Establishing benchmark point-of-purchase data is important, but again, commercial platforms may lack or under-report the ethnic composition of your customers. If needed, collecting the required data directly from site visitors and customers is possible via opt-in surveys.

Finally, conducting an Awareness, Attitudes and Usage (AA&U) study to establish a benchmark is a good option since it’s possible to specifically measure areas you would like to see change.

There are diverse sub-groups within diverse consumer segments, and you can’t target them all. Casting too wide a net may result in your message not resonating with anyone. Creating a customer segmentation is crucial to focusing your message. It’s possible to create a segmentation in-house using CRM data and doing a cluster analysis to create groups (clusters) of consumers that share similar traits. If that’s not possible, you can create a simple segmentation tree that breaks your target consumers out into smaller groups, e.g., Hispanics, Teens vs. Young Adults, Gamers vs. Non-Gamers, etc.

Subscribing to a consumer segmentation tool like ThinkNow’s ConneKt is also a good option as it aggregates multicultural consumer research into a searchable database and can create personas (models) of customers most likely to buy your products or services. 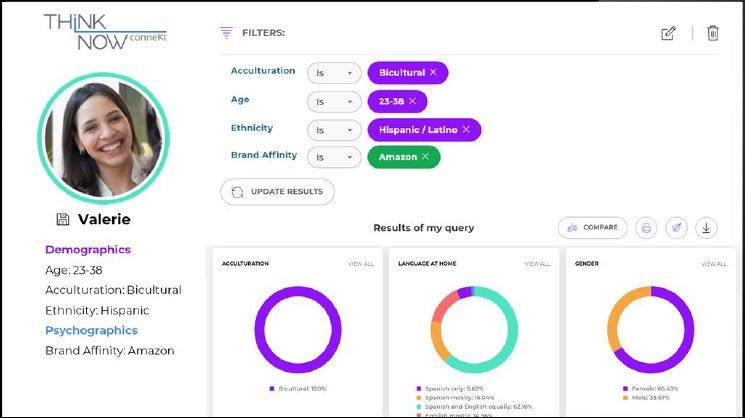 The irony of multicultural marketing is that the more specific you get, the more universal the appeal. Consumers resonate with authenticity and truth. For example, an ad targeting Asians that shows a specific tradition will remind non-Asian consumers of their family traditions. However, we’re past clichés. Saying that Hispanics like being with their families or that Asians are conservative is boring and off-putting. Consumers, especially Gen Z, the most racially and ethnically diverse generation ever, are deluged with ads, and they’ve developed greater discernment. Casting multicultural talent in ads isn’t enough if those ads aren’t telling stories multicultural consumers relate to. True representation is more likely to occur when companies use minority-owned firms to create and promote their messaging. That said, the message must align with your corporate values for it to be believed.

Where to say it

The current go-to for most campaigns is digital. Depending on the target, however, print, outdoor, radio, direct mail or broadcast TV might be better or complementary options. Radio, for example, is effective at reaching individuals who may not be sitting in front of a computer all day. Digital, however, is likely to be a part of most campaigns. Not all social networks, however, appeal equally to all groups. Hispanics, for example, are more likely than other groups to use WhatsApp and African Americans are more likely to use Twitter.

Multicultural influencers can also amplify your message and seeing themselves reflected in the individual delivering your message can have a powerful impact.

How to Measure It

Much like benchmarking, assessing the effectiveness of a multicultural marketing campaign can be challenging as off-the-shelf measuring tools are not always suited to measure multicultural engagement properly. Particularly if more than one language or acculturation level is involved. In off-the-shelf solutions, Hispanic, often means English speaking only, and Asian can mean just about anything since there is so much variety within the Asian community. It is possible, however, with a combination of internal data and external tools to gauge whether your messaging is hitting the mark.

A well-designed CRM that captures multicultural data points is the most direct form of measurement. Measurement in the digital space is the most straightforward, especially if ads were placed through a programmatic ad buying platform that generates automated ROI reports. If an AA&U study was done at the beginning of the campaign, a follow-up wave can measure changes in brand awareness, consideration, and purchase behavior.

Multicultural marketing is no longer a luxury or somewhere to spend leftover marketing dollars. It is the core of the U.S. consumer economy. Piecemeal or inconsistent marketing efforts are generally not worth pursuing since it’s difficult for them to gain enough momentum to see measurable results. They can also diminish a brand’s image if they’re viewed as short-term pandering. In addition to consistent, high-quality multicultural marketing, brands need to invest in internal diversity and inclusion and the communities they are targeting. Companies that integrate those elements into their core mission and offerings will lead the U.S. economy into the multicultural future.