African-American Millennials cemented their position as trendsetters in the media and technology space in 2016. But this cohort has been setting the tone for the conversations feeding social media and the web at large with an influence that vastly outweighs its user base for some time now.

But it’s not just social media. African-American consumers have also reached an economic tipping point as the median income of black households has increased 3.5% over the past three years from 2011-2013, as The Great Recession has waned. During this period, real median household income grew more among African-American households (+$793) than among white households (+$433) and the total population, according to the U.S. Census.

With these positive indicators, ThinkNow Research wanted to take a look at our most recent wave of the Millennial Project, Wave 5, Media and Technology, to uncover some overlooked data on African-American Millennials.

We found several opportunities in the technology and media space for companies to focus resources.

Finding 1: African-American Millennials are the least likely to stream TV programming now and in the near future.

While Hispanics and Asians have found a wave of content aimed at them on streaming services (think Club De Cuervos and Master of None), African-American programming has been resurging via live TV, such as Black-ish and Empire. Of course, both of these shows are available on the streaming service, Hulu, but watching them live is still preferred from a user experience.

Streaming-only services such as Netflix and Amazon have a big opportunity here, but to date, have failed to deliver. African-American Millennials desire more tailored content on these platforms, but find the variety lacking in availability and relevance.

Finding 2: African-American Millennials are slightly more likely than Hispanics to use gaming apps, though they under-index in the usage of apps for weather and fitness.

Hispanics tend to dominate the over-indexing conversation, but when it comes to gaming, African-Americans eek out Hispanics and are close behind Asians and non-Hispanic whites. African-American gamers aren’t a segment the gaming industry talks about much. They represent a large portion of Millennial gamers and could represent an ideal user as African-Americans are active mobile users.

Conversely, fitness apps which are moderately popular among other Millennial groups seem to miss the mark with African-Americans. A recent report by the market research company research2guidance found that the number of health and fitness apps available for iOS and Android devices has more than doubled in only 2.5 years, and that revenue from these apps is expected to grow from $2.4 billion in 2013 to $26 billion by the end of 2017. So the question becomes, are these apps targeting African-American Millennials and if so, how?

Finding 3: African-American Millennials are the least likely to stream music online compare to other Millennial groups. 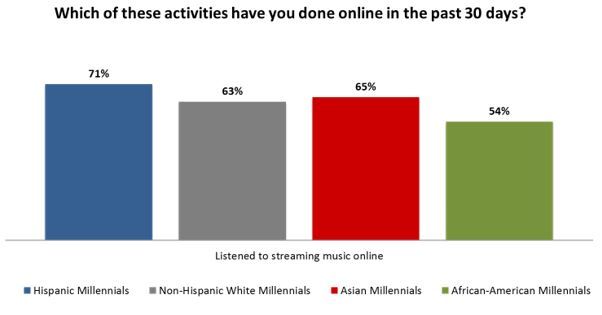 According to Pew Research Center, 43% of African-American smartphone users experience data caps either frequently or occasionally. With African-Americans streaming music more hours per day than all other Millennial groups, providers like T-mobile may have unlocked a big potential among this group with their Music Freedom™ product which allows users to stream unlimited music without using data while on their network from popular music services like Apple Music, Pandora, and iHeartRadio.

As you can see, the impact African-American Millennials have on our consumer landscape is undeniable and growing.

In music, with 2016 already more than half over, the artists and albums that will likely end up as the biggest and best-selling of the year are becoming clearer. It should come as no surprise that Drake’s Views is the best-selling album of 2016 so far by a healthy margin. The record has sold almost 1.3 million copies, while its popularity on streaming platforms simply can’t be matched. Beyoncé’s Lemonade only trails Drake’s Views by about 100,000 actual sales.

In technology (and media, lines are blurring…), the Jay-Z led platform, Tidal, saw an unprecedented growth rate in 2016. Tidal has been growing faster than Apple Music and Spotify COMBINED. Additionally, we saw a resurgence of the Dr. Dre/Apple Beats Brand with new beats launched for the U.S. Olympic team (and the IOC’s failed attempt at banning the logo as it was not an official sponsor). Additionally, after retiring earlier this year, Kobe Bryant made a big splash in the tech world announcing a $100M venture capital tech fund with Jeff Stibel.

And as this group continues to grow in size and influence, understanding their particular usage and consumption habits will be key to winning their spending dollars. But that doesn’t just mean an increase in sales among this particular group. Their influence extends beyond their demographic into U.S. culture at large.