Is Entrepreneurship Dying in America?

Historically, small businesses in the U.S. have fueled the economic engine by supplying a steady stream of new jobs. However, in recent years, new business birth rates have slowed prompting the Kaufman Foundation to declare that startup rates are “half of what they were a decade ago.” This is surprising because the U.S. is seen as a global leader in entrepreneurship. Americans have created whole new industries from scratch through the courage, determination and skill of generations of risk takers.

Is America at risk of losing this status? Perhaps, but why? It’s difficult to pinpoint the exact reasons for the overall decline in entrepreneurship in America.We can, however, tease out differences in overall interest in entrepreneurship by gender, age and ethnicity with the hope of revealing why people want to start businesses and the barriers getting in their way. With any luck, we’ll gain clarity on how to liberate closet entrepreneurs and give them the support they need to thrive.

To do that, ThinkNow conducted a national survey of 1,291 Americans aged 18-64 across various ethnic groups. We asked them about their interest in starting businesses, industries chosen, revenue goals, motivations, barriers and utilization of support services. The results are both eye-opening and potentially concerning. Overall, we found that the desire to start new businesses, revenue goals for those businesses and challenges experienced by their founders are not evenly distributed by gender and ethnicity.

Minorities are the most interested in owning a business, face disproportionate obstacles. 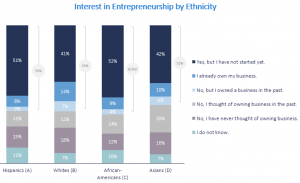 As the demographics of the U.S. shift towards a minority-majority country, it will become increasingly important to support aspiring minorities in the realization of their dreams of business ownership. Statistically speaking, Hispanics are, in fact, starting businesses at higher than average rates. Over the last decade, Hispanic-owned companies have grown at a rate 15 times higher than that of all other firms, according to the U.S. Hispanic Chamber of Commerce. This doesn’t mean, however, that these businesses are on equal footing as businesses started by other groups as they tend to be smaller in scale with slower growth rates.

Both women and ethnic minorities face similar challenges when it comes to financing business growth. Among current business owners, our study found that women entrepreneurs are twice as likely to be challenged by a lack of financial resources than men. And, according to the U.S. Census Bureau Annual Survey of Entrepreneurs “Only 12 percent of Latino businesses access bank loans, compared to 18.4 percent for white-, 15.3 percent for Asian-, and 14.2 percent for black-owned firms.” Fortunately, there are organizations determined to remedy these disparities. The Milken Institute is currently working with the Small Business Administration on a Partnership for Lending in Underserved Markets (PLUM) project that hopes to “identify and analyze the root causes affecting lending to minority-owned small businesses”.

Gender plays a significant role in the motivation to start a business across all cohorts.

The data suggests that men are much more interested in starting businesses than women. 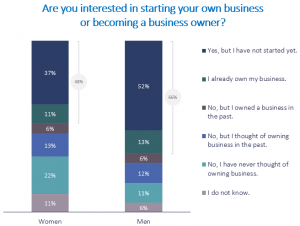 Ethan Mollick, a researcher at the Wharton School at the University of Pennsylvania, believes the answer reason lies in male levels of overconfidence – “Most people who play the entrepreneurship game lose. So, in order to be an entrepreneur, you have to be overconfident. You have to believe that you’re better than everyone around you….women have lower levels of hubris than men — they’re less likely to be overconfident.” This may be true, though from a pragmatic sense, companies run by women are as successful as those run by men… even more so in some cases. Mentoring and peer to peer support are just two of the resources needed to help achieve parity here.

Is entrepreneurship in America dead?

Hardly. Greater efforts, both in the public and private sectors, are needed, however, if the U.S. is to maintain its status as the curator of forward-thinking risk-taking citizens bathed in innovation. The U.S. economy, overall, is experiencing somewhat of a honeymoon of sorts, lulling us into complacency. But we cannot expect jobs and opportunity to be there for the next generation of Americans if we don’t support the current crop of aspiring entrepreneurs in their pursuit of the business success.