It’s Pride Month! Every year, in June, LGBTQIA+ communities worldwide celebrate the freedom to be authentically and unapologetically who they are. City streets erupt in festive expressions of Pride as enthusiastic, and often costumed patrons attend parades, concerts, and festivals decorated with brightly colored rainbow flags, streamers, and confetti. But the celebration doesn’t just bring people together for a good party. Instead, it shines a light on an underrepresented community, like other minority groups, who have struggled to be seen, heard, and included for generations.

Over the past few months, America has been taken to task for its treatment of minority groups. Be it the inexcusable deaths of unarmed black men at the hands of white police officers, unfair and restrictive voting practices that target minority voters, or stereotypical representations of underrepresented groups in advertising. The latter is where we’ll focus. Companies en masse stepped up in 2020 decrying racism in America. But have those public declarations resulted in systemic changes in their diversity and inclusion practices, and how are consumers responding to those changes?

To answer that question, ThinkNow conducted a nationally representative survey of Americans to understand the impact of companies that demonstrate a commitment to diversity and inclusion. The insights are presented in the 2021 ThinkNow Diversity & Inclusion: Brands and Consumer Purchase Intent report, now available for download. Here’s a preview of what you can expect:

Diversity & Inclusion Equals Equality For Most

To most Americans, diversity and inclusion means “racial equality.” This sentiment is highest among Boomers who would have grown up at the height of racial tensions in America. But to younger generations, specifically Gen Z, sentiment skews toward “gender equality.” This generation is being raised in a culture in which household dynamics have changed, and gendered occupational expectations are no longer acceptable.

Other forms of equality take precedent when we look at the data by gender. For example, women are more likely than men to see "differently-abled equality" and "LGBTQIA+ equality" as an example of diversity and inclusion.

African American and Hispanic respondents are the most likely to support a company that makes a public commitment to diversity and inclusion initiatives. LGBTQIA+ consumers are 68% more likely to support brands that make a public commitment to diversity and inclusion initiatives compared to about half of the Total Market, hinting at why more brands are participating in Pride events this year than in previous years. In terms of age, support of D&I initiatives primarily lies with younger demographics, who are redefining identity in America and rewarding culturally aware brands with their loyalty. 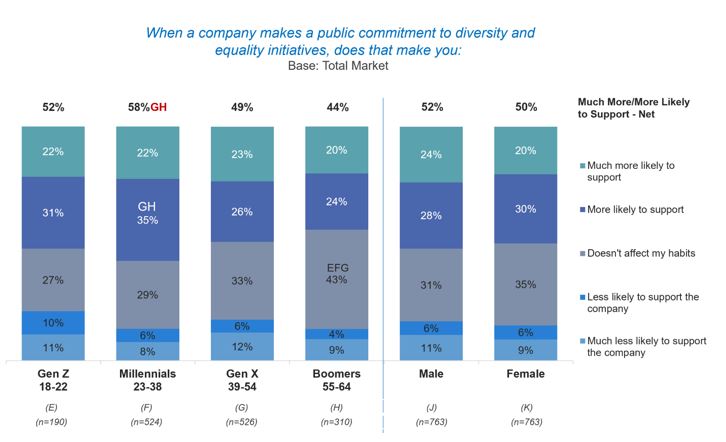 Supporters are vocal on social media, especially among digital natives like Hispanics and young Americans. But, on the other hand, African Americans are more likely to put their money where their mouth is and spend more at stores that embrace diversity and inclusion.

Consumers are equally passionate about calling out brands they perceive as inauthentic in their diversity and inclusion efforts. Data from ThinkNow Connekt shows that LGBTQIA+ respondents are more likely than the general population to unfollow or openly criticize a brand if they feel their content is not authentic.

As culture evolves to be more inclusive, companies and brands are tasked with creating a sense of belonging for all groups. As a result, not only will the need to review and reflect on their internal diversity and inclusion practices, but also how those practices are communicated to the consumer base they serve.

Download your copy of the 2021 ThinkNow Diversity & Inclusion: Brands and Consumer Purchase Intent.