Acculturation continues to be contested in our industry. The death of the Spanish language continues to be trumpeted. The need for specific Hispanic marketing efforts has even been called into question with the growing popularity of Total Market efforts.

How do these two seemingly competitive narratives coexist in the Hispanic market space?

I’ve previously discussed how acculturation is still relevant among specific sub-cohorts. However, there has been a new “culturation” development happening as the proliferation of media companies targeting U.S. Hispanics (and increasingly Asians) have a vested interest in keeping Hispanic culture unique and distinct from the general market. I’m calling this new “culturation” Digital Reculturation.

Before diving into what Digital Reculturation is, let’s briefly revisit the current “culturations” being used in the Hispanic market:

Digital Reculturation is different than the aforementioned acculturation models as they rely on a spectrum of assimilation to mainstream or “American” culture.

Digital Reculturation is the process of rediscovering one’s culture of origin/identification online through digital representations of culture.

The culture being reinforced digitally isn’t necessarily an authentic representation of the culture of origin, but rather a “meme-ified” version of culture. Viewing the home culture through a marketing filter makes it more accessible to second-, third-, and fourth-generation Hispanics who may not have a deep understanding of their home culture, but can recall certain key cultural cues. While the meme can be deemed as inauthentic, the connection it invokes can be very real.

A great example of a cue that is representative of Digital Reculturation is the following meme found on Mitú’s Instagram @wearemitu: 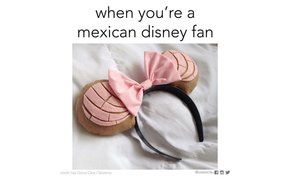 This meme pulls in a wide audience as it references the iconic Mickey Mouse ears but appeals specifically to Latin Americans and more specifically Mexicans through the use of a traditional Mexican sweet bread, pan dulce, called a “concha” to create the ears.

Digital Reculturation allows for second, third, and fourth generations to connect to their culture of origin in a medium they are comfortable with, social media. With the average U.S. Hispanic spending 2.74 hours a day on social media, memes like the above are being consumed on a regular basis providing many opportunities for Digital Reculturation.

As the Hispanic media and marketing economy continues to grow in revenue and influence, being able to track Digital Reculturation will be an important key to connecting with future generations of U.S. Hispanics. More importantly, as iconography, such as memes, continues to permeate culture, companies will have an influence of how Latin American culture evolves online for future generations. Responsible representation of key cultural attributes will be key to being able to connect with the consumers we are looking to sell our products and services to.

This blog post was originally published on MediaPost – Engage: Hispanics