As a market research company with a robust multicultural practice, we’re often asked about how to market to Asian Americans. Often, clients have heard that Asian Americans are wealthier and better educated than other groups and they want to tap into these appealing consumers. However, when we walk them through the different country of origin groups and languages spoken, they’re often surprised by the variety and complexity within this market. One way to simplify the discussion is to look at shared cultural values and craft messages that can be adapted to various subgroups within the Asian American community.

When reviewing research on Asian Cultural Values, however, we see a lot of studies conducted in Asian countries used to describe Asian American attitudes and beliefs. Some broad generalizations about Asian values in these studies hold true in the U.S., but key differences exist between U.S. and foreign-born Asians as well as between various country of origin and demographic groups.

To shed light on these key similarities and differences among Asian Americans, we conducted a survey asking them to rank cultural values by order of importance and broke out the results by country of origin, gender, U.S. vs. foreign-born, age, income and education. We also compared Asian American responses to those of other ethnic groups to see if the values they were identifying as important were uniquely Asian American or universally held. 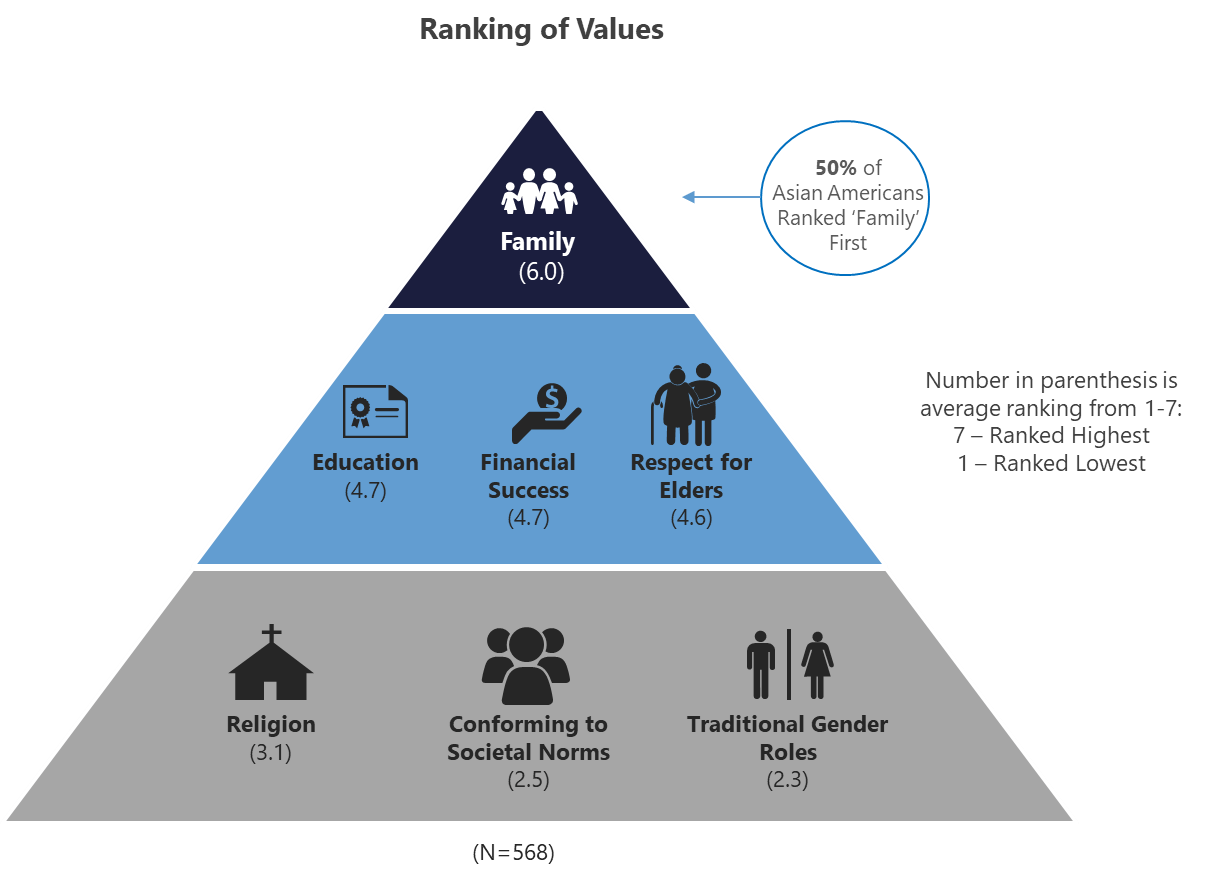 Ranking Family first, followed by Education, Financial Success and Respect for Elders fits within the accepted view of “Asian” cultural values. However, the importance Asian Americans place on those values isn’t a distinguishing factor when crafting targeted communications since these are also the top four cultural values for every other ethnic group in our study. For example, their ranking for Education of 4.7 is nearly identical to the Total Market norm of 4.6 for this value. Based on these findings, it’s difficult to say that there’s an overarching Asian American cultural identity here.

Shifting to an Asian AMERICAN Focus

When thinking of Asian Americans as a whole, the most significant commonality is American. That’s not to say targeted Asian American messaging can’t be crafted. It can, but it needs to start from a place that acknowledges that Asian American is primarily an American worldview. It can be counter-productive to highlight differences to a group that’s more similar than different to the Total Market.

We see this play out in the advertising industry, which has been riddled with failed ethnic-specific marketing attempts. Much of the failure stems from the cavalier use of cultural symbols as if they were magical talismans that draw in ethnic consumers. Using a South Asian model with a bindi or East Asian with chopsticks can backfire if the symbol’s inclusion is perceived as gratuitous. Americans of all ethnic groups respond to messaging that acknowledges that we are part of the fabric of society and that we belong.

So, if Asian American consumer values are more similar than different when compared to the Total Market, what should marketers focus on? Some interesting differences to consider are based on factors such as gender and socio-economic status. For example, Asian American men and women have very different views on the importance of Conforming to Societal Norms. Men rank it a full position higher than women. Showing an Asian American woman breaking barriers in an ad has the potential to resonate much more than an ad that uses cultural symbols as a crutch.

Does Country of Origin Matter?

Fifty-nine percent of Asian Americans are foreign-born as compared to 34% of Hispanics. Foreign-born individuals, regardless of their ethnic group, tend to identify with their countries-of-origin over pan-ethnic assignations. This presents a challenge to marketers. Foreign-born consumers often appreciate in-language and country-specific marketing. However, U.S. born members of the same ethnic groups often bristle at the assumption that they would appreciate country-specific or even pan-ethnic communications. Negative blowback, however, is usually triggered by insensitive or careless messaging. Messaging that targets a specific group can transcend negative stereotypes if it is viewed as authentic.

While the similarity above between Asian Americans and Total market serves as a guiding principle, some differences show up when we look at country-of-origin groups within the Asian American community. For example:

Agencies that specialize in ethnic marketing are usually adept at finding ways to celebrate differences without the negative blowback. At the core of their practice is a deep understanding of cultural identity. They resist the urge to take broad brushstrokes in favor of a more nuanced approach.

Part of the knowledge they leverage is an understanding of how to craft messages that resonate at an emotional level. Understanding how cultural values differ, or not, among various groups can be helpful towards gaining this type of awareness. In the meantime, remember that we are all more similar than different. Highlighting that similarity is always a good place to start.