If you live in California you’ve been bombarded with drought related public service announcements and news stories for the past several months. One would, therefore, assume that everyone in the state is well aware of the drought and its severity.

A couple weeks ago, however, I drove past a yard in my neighborhood that had sprinklers on at full blast on a 90 degree Friday afternoon. I don’t know if the homeowners were deliberately flaunting the Tuesday & Saturday before 9am after 6pm watering rules or if they were simply unaware. Since conducting surveys is what I do for a living I asked my team to run some questions through our online market research panel to determine whether the severity of the drought and mandatory water reduction targets were being effectively communicated throughout the state. We conducted 500 interviews in late August among Californian’s and split the sample evenly between Hispanic and non-Hispanic respondents. We asked three simple questions.

• What is the most critical issue facing the State of California at the moment?
• Have you heard that Governor Jerry Brown has ordered mandatory water reductions across the state?
• If so, do you know what the overall water reduction target is for California?

The results were somewhat encouraging but also revealed some gaps in awareness. Among non-Hispanics, 86% had heard about the mandatory water reductions. While that’s a fairly good result the number drops to 79% among Hispanic respondents, down to 77% among Spanish Dominant Hispanics and 74% among 18-34 year old Hispanics in the state. 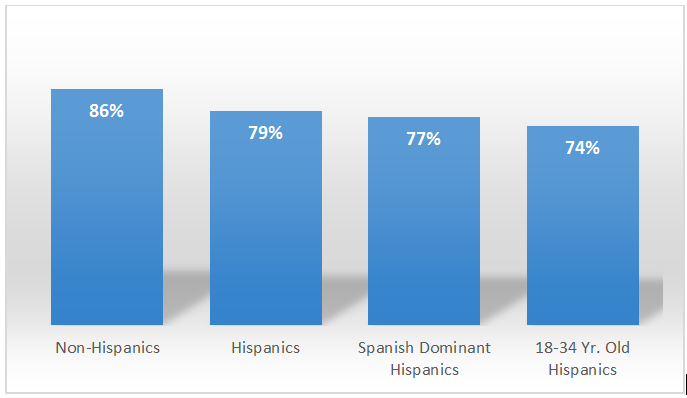 While the above difference wouldn’t matter in some other states they do matter in California because as of July 2014 Hispanics now outnumber non-Hispanic Whites as the largest ethnic group in the state and the average age for those Hispanics is 27, precisely the group that’s least aware of the water reduction mandate. The results of the next question were even more concerning. 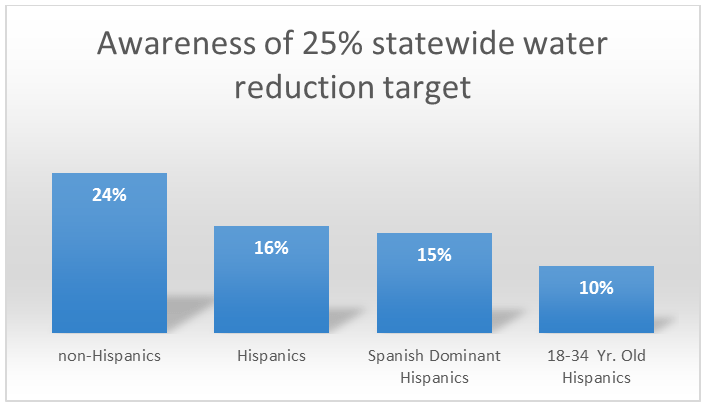 Based on the above findings we weren’t surprised that Hispanics in the state were also less likely to mention the drought as the most critical issue facing the state with 37% of them listing it as the most critical statewide issue at this moment vs. 44% of non-Hispanics. It may be debatable whether the drought is a more critical issue than say gun violence or infrastructure maintenance but it’s clear that Hispanics are less aware of drought related information so they don’t have a level playing field with non-Hispanics to help make that decision.

We recently heard some good news regarding California meeting water conservation targets in July but before we pat ourselves on the back too vigorously we need to consider that it may have been caused by something other than conservation. Rain. California was blessed with a freak rain storm in July which caused many Californian’s to turn off sprinklers and/or not hand water their lawns. It’s possible and probably likely, that without that storm the water reduction story would not have been so positive. Moving forward we can pray for rain and hope for the best or revamp our public communication strategy to fully engage the state’s largest demographic group. While praying can’t hurt, I say we also hedge our bets and do the later.