Steve Jobs was a genius. He could envision and bring to market revolutionary products that set the standards in their industries. He was also known for relying on his intuition over market research. Due to the success of Apple, many people subscribe to this logic and opt-out of conducting market research.

But there was only one Steve Jobs. The marketplace is littered with failed products and services that seemed like a good idea to their creators and were rushed to market only to find that no one asked for or needed them. Complicating matters further is an unprecedented demographic shift towards multiculturalism that is changing the composition of the U.S. consumer market.

In business, intuition can be useful, but it needs to be optimized by market research, especially when attempting to tap into diverse markets. If you’re not advising your clients to conduct market research, you are doing them a disservice as they don’t have the facts to make informed decisions about their marketing strategy.

So, the next time you’re tempted to use your gut on a project, consider these five reasons as to why that may not be the best approach for your client:

The very first step towards being able to sell something is understanding who the target consumers are. In the 1950s, when the American consumer market established itself as a driving force in our economy, selling was a fairly straightforward proposition. American consumers were over 85% White and shared similar values. Communication channels were fewer and the Big 3 broadcast networks reached most Americans. Non-Hispanic Whites are now approximately 60% of the population while individual communication channels reach increasingly smaller slivers of the population. Companies seeking to grow their consumer base need to turn to the only segments of the U.S. population that are growing, multicultural consumers, through the channels they prefer. 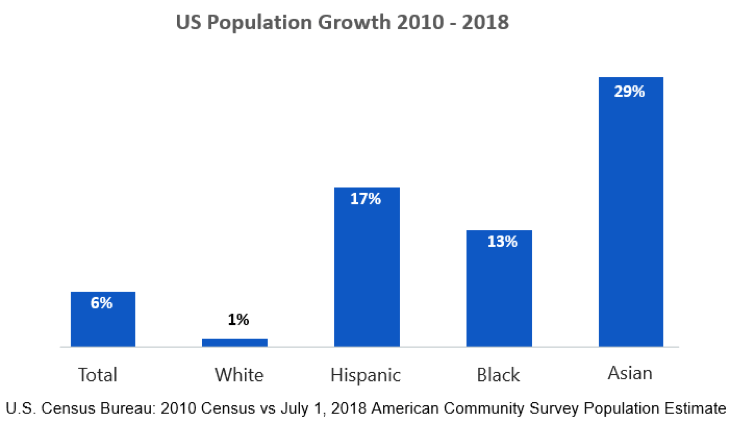 The 1% growth of the non-Hispanic White population seen in the 2010 to 2018 estimates is even worse than it appears since new Census data shows an actual decline in real numbers starting as early as 2015.

What seems obvious to a brand manager or ad agency is sometimes cause for confusion among multicultural audiences that don’t share the same cultural references as the creatives. Common U.S. cultural touchstones and expressions are not necessarily shared by multicultural audiences. Testing messaging ensures that the ideas trying to be communicated are understood but not misconstrued.

Additionally, we assume brand managers know more about their brand than their consumers. That is not always the case. For instance, a large condiment manufacturer decided to copy-test their Spanish language ads and the brand managers were confounded by the large number of respondents that were referring to their ad as a mayonnaise commercial. It turns out that their brand is known in Latin America for mayonnaise even though they do not make that product in the U.S. Had the brand moved forward without doing the research, their potential Latino customers would likely have looked for them on the wrong supermarket shelf.

Your Competition Exists for A Reason

The U.S. consumer market is mature, and most brands have staked out a segment that resonates with their brand’s identity. As the market shifts towards greater multiculturalism, however, brands will need to understand what they can offer these new consumers. Market research can help.

Different products speak to different consumer needs and they aren’t always obvious. We don’t buy particular brands of cars, for example, because we need transportation. We buy them because they act as an extension of our identity. Brands have their own identities. They can’t be all-things to all-people, but they can find and connect with their audience.

Multicultural segmentation studies often reveal surprising groups of consumers that brands may not be paying attention to. For example, Buchanan’s whisky is from Scotland and marketed around the world by Diageo plc. Here in the U.S., some of its most passionate fans are Mexican. It seems the brand has been immortalized in several popular corridos (a ballad typically having lyrics that narrate a historical event). This consumer segment is important enough to merit its own Spanish language targeting.

Multicultural consumers are, on average, ten years younger than non-Hispanic whites. The younger the age bracket, the more multicultural the population becomes. 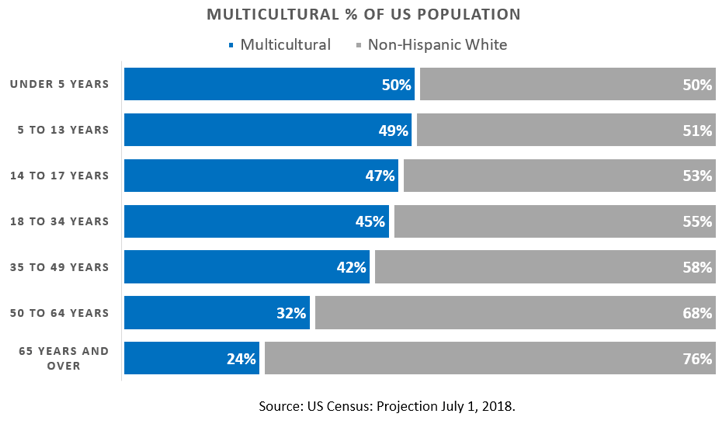 The 10-year age difference between multicultural consumers and the rest of the market means they still have major life events such as having children and buying homes ahead of them. They won’t, therefore, respond to sales messages trying to sell them products and services in the same way as non-Hispanic Whites. Selling financial products to multicultural consumers, for example, requires a greater focus on education before the benefits of the product can be discussed. Expectations for what constitutes successfully launching young people into adulthood are also different among multicultural consumers. Different types of homes and living arrangements are needed to meet their needs.

Lastly, we often hear clients don’t have time to engage in market research. Instead, they’ll do A/B testing on collateral and “keep what works”. This approach is fine for low-stakes call-to-action banner ads or for testing elements of a website, but it doesn’t do anything to inform the original content of the marketing message.Many of our clients are surprised to learn that we work with Google, Facebook and Snap to help them better target their customers. These companies know that their systems are closed loops. They can gather information about what people do while on their sites, but they don’t know why they fired up their device to get to sites in the first place or why they left.

Conducting market research with consumers in the real world often reveals the thought process behind the clicks. This type of research is even more critical among multicultural consumers because they consume more digital content than other consumers and getting representative samples of them requires the services of a qualified market research professional.

Trusting intuition is great for lots of things. It can keep you from being mugged and may help generate initial product or service ideas. But testing that intuition can mean the difference between success and irrelevance, especially with multicultural audiences.

Are you in touch with today's multicultural audiences?
Test your knowledge and find out how well you know the modern consumer landscape!