Moving market research studies from face-to-face to online has been going on for quite some time… and why not? There are numerous smart reasons for doing this… it’s almost always faster, generally less expensive, opens up large geographies to the researchers, increases the number of potential participants and with the vast majority of Americans online, the demographics of the online population mirrors that of the US population as a whole.

But for a while now, there has been an underlying feeling in the research community that that same positive comparison does not apply when conducting tracking studies within the Hispanic community… that is, some believe that the demographics of the online Hispanic population does not mirror that of the overall Hispanic population. For example, some of our clients are concerned that:

Spanish-dominant consumers are not online.

In fact, according to the Pew Center for Hispanic Research (www.pewhispanic.org), as of September 2012, more than 73% of all Hispanics go online (up from 65% just two years ago) and of those, over 20 million Spanish-dominant Hispanics use the internet.

In fact, one of the biggest benefits from taking your Hispanic tracking studies online is data stability – that is, consistency from wave to wave. This happens online because we’re dealing with such large numbers to start with, allowing us to be assured of optimal randomization… and ultimately, the most valid and consistent data. Face-to-face studies are confined to much smaller sample sizes, resulting in not-so-surprising inconsistencies in the analysis.

In fact, because so many Hispanics are online, the demographics of online Hispanics is virtually identical to the population overall. For example, look at Household Income: 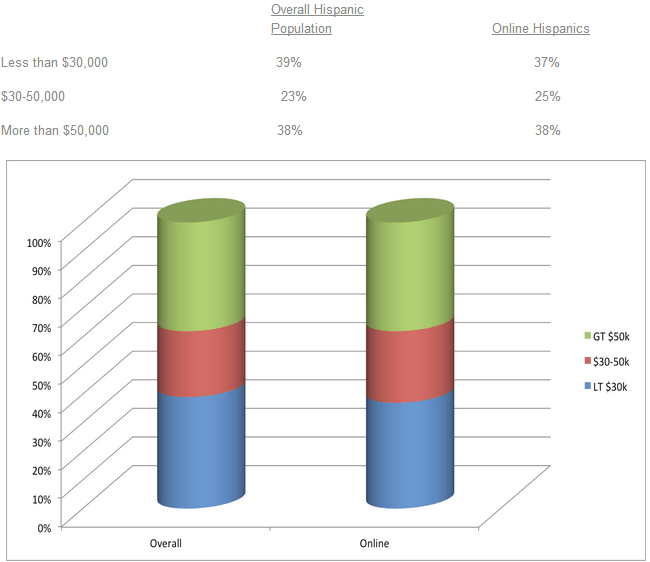 Online samples are not nationally representative.

In fact, going online tears down any geographic boundaries and opens up access to literally millions of Latinos across the country. When you layer on top of that enhanced recruiting technology and recruiting methodologies, we’re able to create a research sample that mirrors the US Hispanic population perfectly.

The Client: A nationwide provider of alcoholic beverages that had been sponsoring a continuous tracking study of males 21-34 nationally in the top 10 Hispanic DMAs.

Their Problem: This study had been accomplished via face-to-face interviews for two years before they noticed that the data was not trendable because of large anomalies. Upon further review, ThinkNow Research discovered that several of the face-to-face facilities were gathering data near transient populations that were not from the area.

Our Recommendation: To build a comparison case, we suggested that the client transition half of the data collection to online via our Hispanic panel for the first year.

The Results: Upon reviewing the data after the year one, it was found that moving their tracking study online created stability from wave to wave in conjunction with the face-to-face interviewing. After year two, the client decided to move 100% of the study online. The result – more stable data across all DMAs and a 300% cost savings.

10 years ago, you could have made the case that conducting Hispanic tracking studies may not have been a wise decision. But now, because of the explosive growth of the Hispanic population, similar growth in the use of technology by Hispanics and enhancements in recruiting technology and methodologies… not taking your studies online could only be considered foolish.