Reflecting back on the 18-month Hispanic millennial project that had five waves (four new mini-waves are slated for the rest of 2015 and early 2016), I realized that we had tons of data that didn’t rise to prominence because there was just so much to be highlighted. As I dove into our most recent wave, Media/Technology/Digital Trends, I realized that there was an unexplored facet to this research, Spanish-language music.

What first got me thinking about the untapped potential of Spanish-language music was this table: 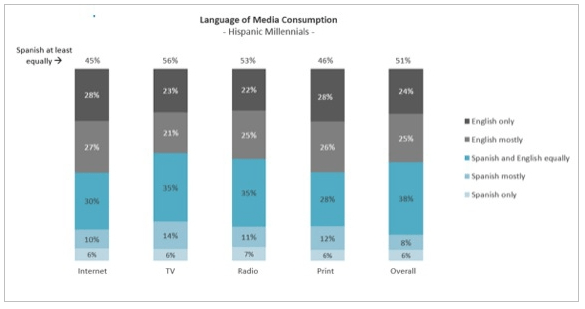 We asked respondents “How much of an influence would you say your culture/heritage is on each of the following?” For Hispanic Millennials, almost 70% cited that culture/ethnicity was a big influence on their music choices. The natural assumption is that Spanish language music would be the first choice for Hispanic millennials in terms of influence and that hypothesis is supported by the following chart which highlights how 53% of Hispanic millennials listen to some Spanish radio:

Spanish streaming services and radio have likely been overlooked as a way to connect with millennials due to the assumption that:

1. Millennials no longer listen to the radio

Our data paints a much different picture. While it is true that millennials are streaming the majority of their music, there is still a segment of the population that use radio to connect to their heritage. Beyond the music programming, radio offers on-air personalities that Hispanic millennials grew up listening to with their parents and provide another avenue to connect with their culture beyond just the music.

Additionally, music provides a connection to culture that is deep rooted in Latino tradition. During an informal conversation with a Google employee, they shed light on an unpublished statistic that on the surface seems inconsequential, but in reality provides even more insight into the importance of Spanish music: Over 50% of the Spanish language music streamed on YouTube is Norteño music.

Norteño is a regional genre of Mexican music related to polka and corridos; you’ve likely heard the distinctive “boompa boompa” rhythms of norteño music at one point or another. This genre is pretty specific and popular among Mexican-Americans and also other Latino groups who have grown up in the U.S. and have been exposed to Mexican music. This statistic reaffirms the idea that Latinos are looking to Spanish music to connect with their culture and heritage.

Spanish language music provides a unique opportunity for marketers to reach this audience. As pointed out in a recent NatGeo Mundo segment we were featured in regarding bilingual advertising:

“There is a growing body of evidence that suggests that the language we spoke as children has a more direct connection to our emotions and when logic and emotion are pitted against each other, emotion has a built-in advantage. That’s because the emotional centers of our brain were built to keep us safe so they react to stimuli much faster than our logic centers can. By the time our logic kicks in there’s already a bias towards what our emotional brain has determined. Advertisers know this and design their ads to connect with consumers on an emotional level as best they can.”

Streaming services with Spanish language targeting such as Pandora and Spotify along with Spanish radio provide a more affordable advertising option for marketers to reach Hispanic millennials in a culturally relevant way. Digital advertising continues to take the majority of advertiser dollars but Spanish language music may be a way for brands to differentiate themselves and be heard by a culturally engaged Hispanic millennial audience.

This blog post was originally published on Media Post Engage Hispanics, where you can view other publications about Hispanics in America.