OTT Binge Viewing On The Rise Among Total Market

Binge Viewing Increases Are Particularly Heightened Among U.S. Hispanics Across All Age Groups

Binge viewing has not slowed down in 2016. Streaming services’ plot to keep us on our couches for as long as possible is working. Thankfully instacart is coming to more cities now so we can get our groceries delivered to us while we binge watch the last four seasons of House of Cards.

Taking a look at the Total Market (Hispanic, Asian, African-American, and non-Hispanic White), binge viewing is up across the board: 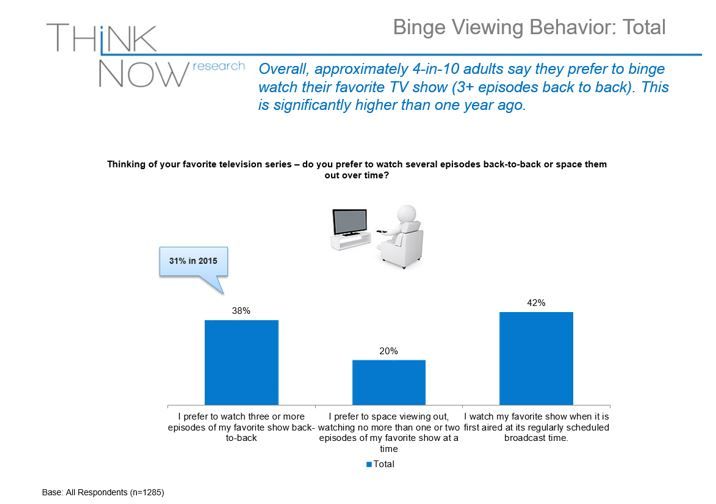 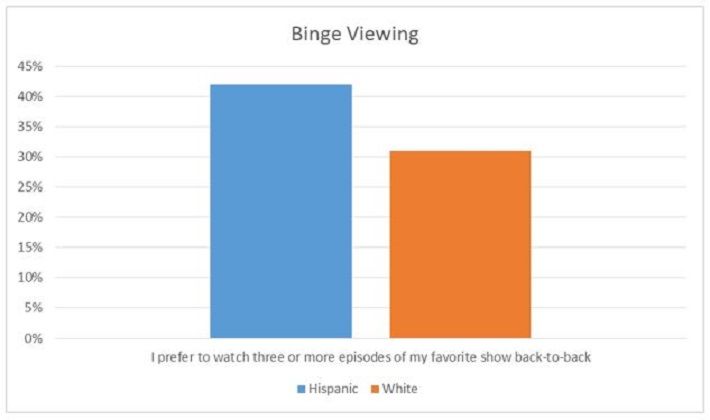 How do we explain this heightened preference for binge viewing among Hispanics vs. their non-Hispanic counterparts? Well, the easy explanation would be that Hispanics as a whole are significantly younger as a population than their non-Hispanic White counterparts, 27 years vs. 37 years, respectively, and young people are the ones binge viewing more, so it makes sense right? Sort of…

If we take a look at Hispanics and non-Hispanic Whites ages 18-34, the disparity in binge viewing lessens: 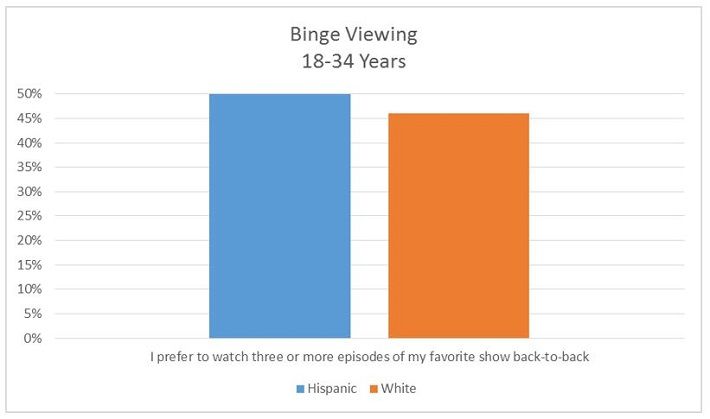 Non-Hispanic white binge viewing jumps up to 46% but Hispanics still beat them out at 50%. The real difference comes when we look at their older counterparts: 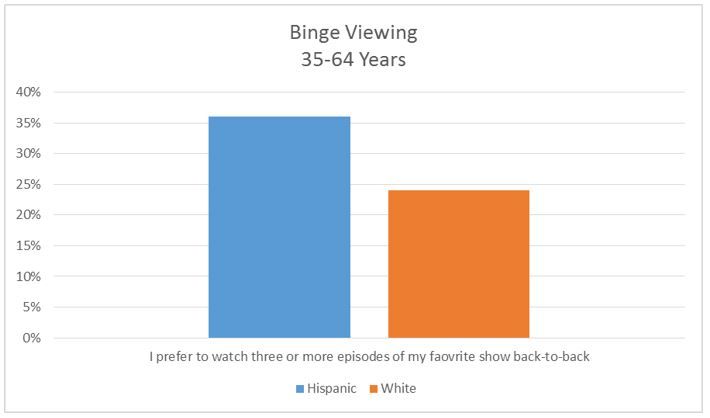 The assumption that younger people are driving binge watching numbers is true. However, non-Hispanic whites exhibit a particularly low rate of binge viewing at 24%, the lowest preference of binge viewing across all ethnicities. Hispanics ages 35-64 were lower than their younger counterparts but were still binge viewing at a relatively high rate of 36%.

Regardless of age, binge viewing is a trend that is continuing to increase in popularity. Streaming services have been on a buying spree since Cannes last year, and it looks as though their investment is paying off. However, a more nuanced approach to content is still missing.

Our report delves deeper into the binge viewing habits of not only Hispanics and non-Hispanic whites, but also African-American and Asian viewers. Our data points to viewer habits that vary across ethnicities and our previous reports point to a distinct cultural difference in terms of the types of storylines that resonate with each group.

Netflix, Amazon, and Hulu would benefit from better understanding the diversity of their audiences from a data perspective as there is a large opportunity to create content that will hit a cultural chord with each group. Up and coming streaming services such as YipTV and Mexican streaming service Claro Video have advantages in this sense as they are starting from a very specific point of view and expanding from there.

The streaming service wars are just beginning, but the good thing is in this war we will all benefit from the battles.