Not All Millennials Are Abandoning Big Beer

(Disclaimer: All data cited in this post are from respondents 21+.)

Craft Beer has been dominating the alcoholic beverage scene for the past several years and it doesn’t seem to be slowing down. The large domestic brewers have been taking notice and have been playing the defensive through some recent advertising and through the acquisition of craft beer brands.

This tug of war has helped catapult traditionally third-tier players like Corona and Modelo into second-position spots as beer drinkers search for a break from craft and domestic.

The narrative for domestic beer has been doom and gloom of late. However, if we look at Hispanic 21+ millennial beer drinkers, they move beyond the “over-indexing” narrative and provide an untapped (pun intended) opportunity for the big guys to be more relevant.

However, digging deeper into preference sheds a different light:

So what can be driving Hispanic 21+ Millennial beer drinkers to consume the same amount of craft beer as their non-Hispanic white counterparts and yet so significantly under index in taste preference? We know that connecting with friends is a significant driver of beer consumption among Hispanic 21+ millennials which could be driving the craft beer consumption in social situations: 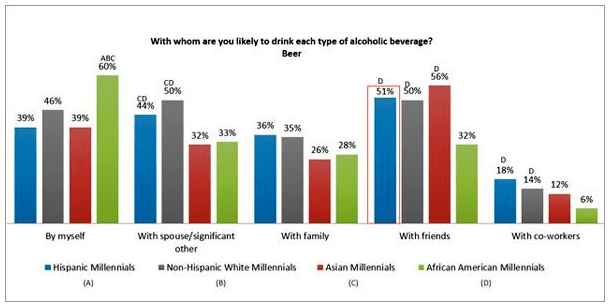 However we know that Hispanic 21+ millennial beer drinkers do not like the often dark and bold flavors found in craft beer as highlighted in our Food, Beverage, and Alcohol wave of the Hispanic Millennial Project.

Our data shows that Hispanic 21+ millennial beer drinkers may be drinking craft beers in social situations not because of preference, but because it is a way for them to connect with their friends. Their beer taste preferences are clearly different than their non-Hispanic white counterparts and even more pronounced when we start to look at how culture influences their drinking preferences:

So what does this all mean? Well, this is good news for the large domestic beer brands. Taste profiles of domestic beer fits better within the Hispanic 21+ millennial beer drinker in terms of flavor preference. The craft beer movement is happening and it doesn’t look to be slowing down any time soon. The Hispanic 21+ millennial beer drinker presents an opportunity for domestic beer brands stop fighting the move towards craft and begin embracing core consumers they’ve had all along. Some other tactics that have had some mild success are ethnic flavor innovations from brands like Blue Moon with their Cinnamon Horchata Ale. This may be another path to success among Hispanic 21+ millennial beer drinkers as culture plays a large role in their beer consumption habits. Maybe a tamarindo IPA is in the works? We’ll see … .

This blog post was originally published on Media Post Engage Hispanics, where you can view other publications regarding the Hispanic demographic.