Here’s a startling statistic. By 2042, Baby Boomers are poised to hand over as much as $70 trillion in inheritance to their heirs, and Millennials are the lucky demographic most likely to clean up. Boomers, affectionately named after the “boom” of babies born after World War 2, were the first generation in America to grow up in a prosperous middle class. Before the 1940s, luxuries like homeownership and vehicle ownership were reserved for the upper class. But between 1940 and 1960, four-fifths of American families owned at least one car, and homeownership increased to 61%.

Baby Boomers currently hold the majority of wealth in the U.S., and as they pass away, the “Great Wealth Transfer” will have ripple effects across generations. Millennials and Gen Z will become the wealthiest generations due to this massive transfer of wealth from their parents and grandparents.

While the majority of that wealth falls outside of minority communities, cumulatively, Millennials and Gen Z, particularly, are the most diverse and multiracial generations in U.S. history. So, how will this change the culture and mindset of these two demographics?

According to a study conducted by Bankrate, Millennials prefer cash over stocks and are less inclined to invest in the stock market. The Bitcoin craze and meme stocks have found a faithful following in Gen Z, who has re-written the rules on personal finance. Younger generations are less interested in their parents’ financial playbooks and more interested in writing their own. On paper, Gen Z is the least financially educated, followed by Millennials, as noted in the 2021 P-Fin Index below, which is based on responses to 28 questions across eight functional areas: earning, consuming, saving, investing, borrowing/managing debt, insuring, comprehending risk, and go-to information sources. 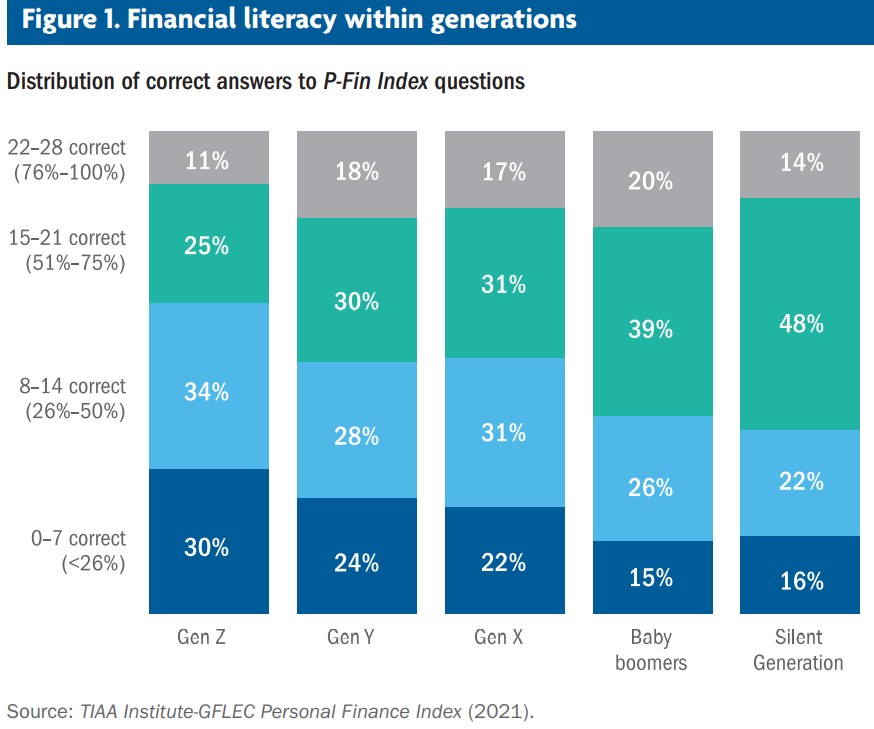 While their approach to finance may be less conventional, it is gaining momentum, powered by social media. Fintech will have to learn how to market to digital-first, multiracial generations who have been schooled in finance by TikTok, making multicultural insights more critical than ever.

It’s fair to assume that the older a person becomes, the more financially conservative they become. This is especially likely when a person inherits money and is introduced to this dirty three-letter word – tax, more specifically, "wealth tax." When this multicultural generation sees a bump in income, they may sway toward the more financially conservative side of politics and force political parties to move back to the center. Political parties can't just run on identity or nationalistic populism, and they will have to offer real policy change to appeal to these soon-to-be trust fund generations.

Millennials currently account for less than 5% of all US wealth. Not every single Millennial and Gen Z will inherit money, and there will be an unequal distribution of wealth. In reality, the vast majority of the wealth transfer will benefit the upper middle class and above. Still, as a society, this will be the most significant transfer of wealth in American history, turning the spotlight on a newly minted nouveau riche multiracial consumer base equipped with considerable buying power, emphasizing the importance of understating multicultural insights.