For Hispanic World Cup Viewers, It's About Heritage

In 2011, Fox and the Spanish-language network Telemundo won the rights to broadcast the 2018 and 2022 World Cup in the U.S. for a record $1 billion dollars. Fox agreed to pay roughly $400 million and Telemundo will pay roughly $600 million.

Flash forward, and the U.S. failed to make the World Cup. Was the investment worth it? The short answer is “yes.” With the 2018 World Cup around the corner, we surveyed a representative sample of 500 Hispanics and 360 non-Hispanics to understand how they engage with soccer on social media and how they plan to follow the World Cup. The insights gained from this information can be used by marketers to attract advertisers to their platform and maximize the opportunity the World Cup presents.

When asked, “How likely are you to watch any of the soccer matches in the upcoming 2018 World Cup?,” almost 75% of non-Hispanics stated they were either somewhat or very likely to. For Hispanics, this jumps to almost 90%: 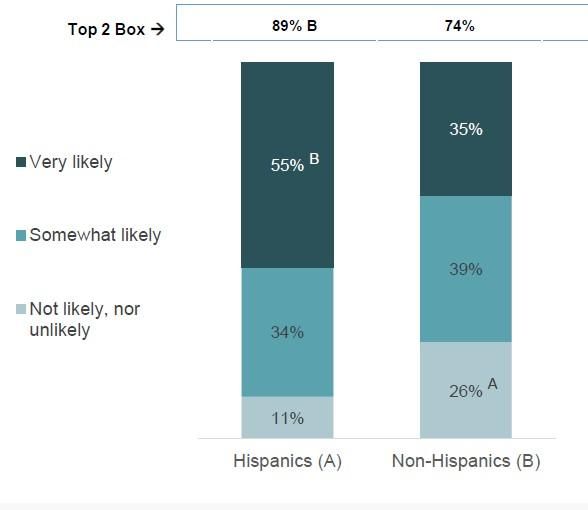 Telemundo’s $600 million bet looks like it will pay off with almost 90% of Hispanics planning to tune into the World Cup this year, right? Maybe…

Traditional wisdom has driven home the idea that Hispanics of all English language proficiencies prefer to watch soccer matches in Spanish, but the data seems to point to the erosion of that long-held belief.

Heritage or culture when harnessed appropriately can be a powerful driver of key brand metrics as highlighted by the recent “Marketing to the Hispanic Mindset” study which showed that:

So, for marketers looking to tap into the Hispanic market, the World Cup is an ideal time to jump in. There is rarely an event that cuts across all language, economic and country of origin segments of the Hispanic population with a deep cultural driver like heritage for U.S. Hispanics. Aligning your brand in a culturally relevant way during the 2018 World Cup can kickstart your Hispanic marketing efforts if done correctly.

Simply showing a Hispanic family on a couch watching a soccer match is no longer enough. Brands that dig deeper and show that they understand the nuances of being a fan of the Mexican National Team or the rivalry between Argentina and Brazil have the opportunity to connect with their Hispanic consumers at a deeper level. McDonald’s did a terrific job in 2014 with its “House Divided” ad featuring a father and son supporting two different teams.

The absence of Team U.S.A. from this year’s tournament is certainly a disappointment but matches featuring Mexico, Brazil, Argentina and Colombia will draw an emotionally engaged audience of U.S. Hispanics willing to hear what your brand has to offer them.

This blog post was originally published on Engage: Hispanics