Bilingual Advertising – The Next Thing or Next Mistake?

I recently attended a conference and listened in on a session addressing language use in advertising. The question of which language to use in advertising comes up frequently in Hispanic strategic planning since budgets don’t always allow for dual language campaigns. The presenter in this particular session said that language was secondary to the cultural touch points in the advertising. The next session at the conference presented research on how respondent’s brains react to advertising depending on language used and found that language did indeed matter. Who was right? Could bilingual advertising be a viable solution?

After the conference, as I was pondering this issue, a 30-second AT&T television ad, Vive Sin Compromisos, caught my attention. It shows young, appealing, Latinos talking about themselves and reacting to the company’s cellular service.

What makes this ad stand out is that the actors speak in English, Spanish and mix of the two – Spanglish. Since we do quite a bit of ad testing here at ThinkNow Research, here was a chance to understand how an ad resonated with Spanish-Preferred Hispanics, English-Preferred Hispanics and the presumed targets of the ad, Bicultural Millennials, so we tested it through our ThinkNow Link™ online ad test. We also tested it against non-Hispanic viewers to determine their reaction should the ad air on English language television.

First the good news: The ad had normative Recall scores among all Hispanic groups regardless of preferred language or whether they were Bicultural Millennials. Roughly half of the respondents who saw the ad remembered it which is typical of most ads. Now the bad news: It had very little effect on making respondents want to buy the product. 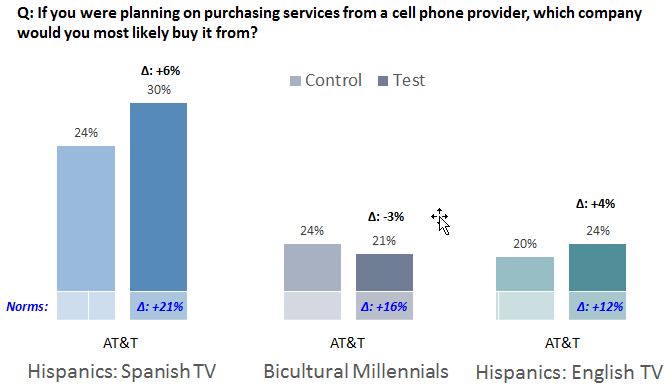 The ad also had the highest scores for being confusing and irritating of any ad we’ve tested regardless of language preference or acculturation status.

One could argue that the only respondents that mattered were Bicultural Hispanic Millennials since the ad features them and is intended to air on networks such as ESPN Deportes and MTV Tr3s but over 40% of this group also found the ad to be confusing and irritating which was even higher than the other groups. 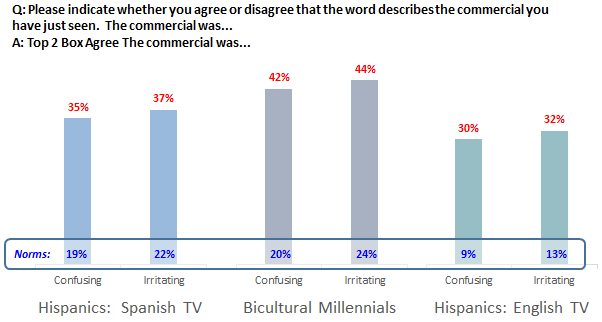 It wasn’t all bad news though. When it came to their perception of the ad and the feelings that it evoked, the Spanish-preferred and Bicultural groups were very closely aligned giving the ad normative scores. The English-preferred group took a different path – sometimes, dramatically so.

Here are just two examples to illustrate the point.

1) The following shows the percentage of participants that agreed with the statement, “The commercial was…” Likeable / Believable / Entertaining / Convincing / Funny.

In both the cases above, English preferred Hispanics gave the ad below average scores. This would suggest that language does, in fact, matter. All the respondents were Hispanic, the cultural cues were also all Hispanic but language preference significantly skewed perceptions of the ad.

Those differences were highlighted even more when we asked non-Hispanics what they thought of the ad and found that it didn’t work with this group on any level even though half the dialog was in English and the parts that were in Spanish had English subtitles. We only tested the ad with this group because Spanish language ads have aired on English language television in the past and we wanted to see how non-Hispanics react and the answer in this case is not well.

Does language matter? Yes. Are cultural cues enough to reach my target audience? No. This has implications beyond just Hispanic advertising and may change how we think about Total Market Advertising. For those of you who haven’t been following this debate, Total Market Advertising differs from targeted Hispanic, African American or Asian advertising in that it tries to incorporate cultural understanding into messaging with the hopes that it will appeal to a wider Total Market while still pulling in multicultural consumers. While incorporating some cultural cues into mainstream advertising is generally a good thing it isn’t enough to replace in-language/in-culture advertising.

Communicating to potential customers in the way that they want to be communicated to is a key driver for success. Assuming that messaging meant for one group will be accepted by another is not.

A couple key take-aways from this ad test include:

In fact, communicating to a group in a language other than what they expect can backfire and increase negative reactions to the advertising. The findings of this test are not meant to definitively answer all questions related to language use in advertising but they do highlight some of the challenges and tradeoffs brand managers and strategic planners face when making these decisions. We haven’t figured out the magic language formula yet but we’re getting closer and when we figure it out we’ll let you know.