2015 Holiday Shopping Trends – Hispanics Have Their Own Timetable

The National Retail Federation predicts that Holiday sales will rise 3.7% this year over last. Our most recent national Omnibus Plus™ survey also shows that there will be an increase in overall sales this year. 28% of Latinos state that they will be spending more this year than last vs. 19% who state that they will be spending less. That 9% difference in favor of more spending is identical to non-Hispanic consumers.

Retailers, however, are not leaving anything to chance and know that they’ll need to compete vigorously for every holiday dollar. One way to try to get consumers to spend all or most of their Holiday dollars with you is to be their first shopping destination. That strategy may be more relevant this year than last since retailers may get fewer bites at the apple this year. More consumers in our survey stated they were more likely to do their shopping “all at once” this year than last. Last year, 17% of Hispanics said they would do their shopping “All at once” vs. 28% this year. Non-Hispanics displayed a similar trend but the margin was lower.

It’s difficult, however, to know when to time sales since all consumers don’t follow the same holiday shopping patterns. For example, 40% of non-Hispanics had started their shopping by the end of October vs. only 22% Hispanics stating that they started their shopping that early. By Black Friday, however, 63% of Latinos said they were likely to go shopping on that day this year vs. 52% of non-Hispanics. This makes Black Friday especially important to retailers if they’re courting Hispanic customers. Hispanics get a late start but 65% say they shop last minute deals vs. 54% of non-Hispanics.

Many retailers have started opening on Thanksgiving Day. Is this a good strategy? Like Black Friday, Hispanics are more likely to say they would go shopping on Thanksgiving Day, 49%, vs. 39% of non-Hispanics. The difference was even more pronounced at the bottom of the scale with 38% of non-Hispanics saying they were “very unlikely” to go shopping that day vs. 21% of Hispanics who held that view. It seems Hispanic consumer have fewer negative feelings about leaving their families on Thanksgiving to go shopping. Perhaps that’s because Hispanics are more likely to take their friends, adult family members and kids with them when they go shopping. 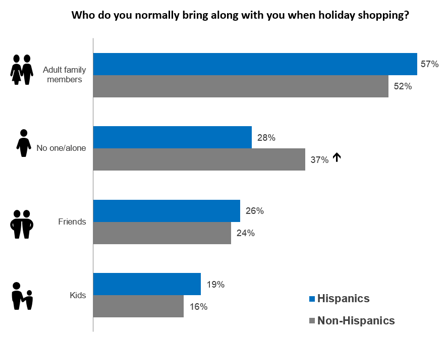 By the time Cyber Monday rolls around, however, both Hispanics and non-Hispanics are on the same shopping page. Over 65% of respondents from both groups said they were likely to shop on Cyber Monday with the day being most popular among Millennials, those with children and high income groups.

The days of clipping newspaper ads to find the best deals are fading and being replaced by smart phone swipes. 42% of Latinos learn about deals through social media and 55% of Latinos say they’re inclined to share deals on Facebook, Twitter or other social media sites with that number increasing to 60% among Millennials. From internal research we also know that Hispanics have more positive attitudes towards advertising they view on their mobile devices and are more likely to be influenced by those messages than non-Hispanics.

Layaway Is Still a Thing

It Ain’t Over Until the Three Kings Sing

OK, the Three Kings don’t actually sing. Three Kings Day, aka The 12th Day of Christmas and Epiphany marks the day the three wise men arrived in Bethlehem with their gifts. It’s part of the Catholic liturgical calendar and is widely celebrated throughout Latin America. Three Kings Day, January 6th, will be celebrated by 41% of U.S. Hispanics and 57% of Less Acculturated Hispanics. Aside from gathering with family, 50% of Hispanics will buy special food, and 41% will buy gifts. Why do Hispanics mark this day in greater numbers than U.S. Catholics? Maybe it’s greater religiosity or perhaps a desire to extend the Holidays and spend more time with loved ones. Regardless, it’s a final opportunity to engage with consumers over the Holidays and companies that meet their needs throughout the entire season will reap the rewards.