On the heels of one of the most prolific content years for major streaming services like Amazon with 2 Golden Globes for “Transparent” and Netflix releasing the 3rd season of the hit show “House of Cards”, we at ThinkNow Research decided to conduct a nationwide survey to explore the TV binge viewing habits of Hispanic Consumers.

So is binge viewing the new norm?

Well, it depends on what age group you’re looking at. On an overall basis, binge viewing is clearly closing the gap as the preferred method for watching TV shows compared to traditional methods -- but it is the coveted 18-34 year old segment that is most responsible for this trend.

When Hispanics 18+ were asked how they preferred to watch their favorite show, 40% said ‘3 or more episodes back-to-back’. When looking exclusively at 18-34 year olds, however, this number climbs to nearly half (48%). This is much higher compared to 35-65 year olds who are still more likely to prefer watching their favorite shows when they air on broadcast TV (46%). 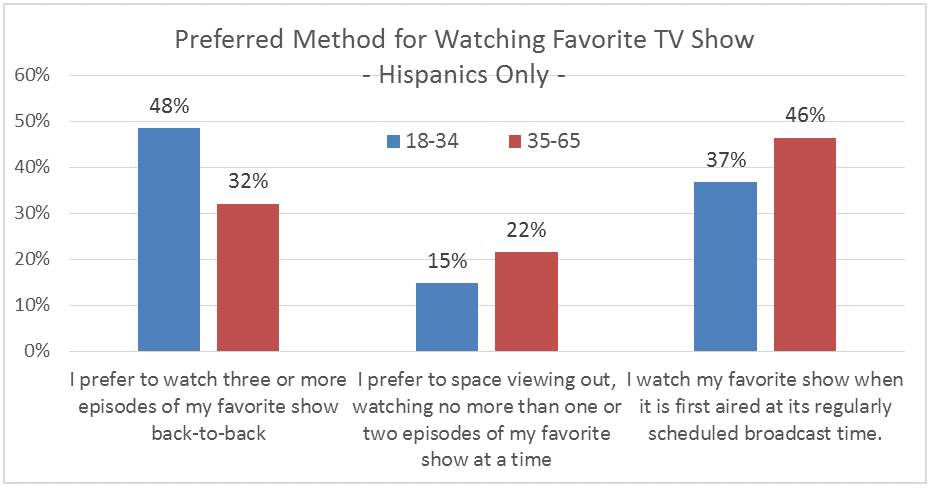 Hispanics are also more likely to binge view compared to non-Hispanics. The majority of Hispanics reported watching an entire season of a TV show over one weekend compared to about half of non-Hispanics (60% vs. 49%). Again, this is much more common among 18-34 year olds (68%).

An important cultural touchstone for Hispanics is a “sense of community.” Interestingly, this also plays a role in their binge viewing.

When asked, “When you watch three or more episodes of a TV show back-to-back, are you usually watching TV by yourself or with someone else?,” 45% said ‘with someone else.’

When asked about the way in which they watch TV, less than 40% of 18-34 year olds reported watching live TV (the anti-binge viewing method). They were far more likely to watch programming via Netflix, Youtube, Hulu and others compared to 35-65 year olds.

So, what does this trend mean?

The tug of war between streaming services and traditional networks will continue and regardless of who wins, the viewers will ultimately be the winners as the struggle has produced some of the best television content in years.