The quick service industry is undergoing a radical shift towards fast casual formats and higher quality ingredients. Perennial industry leader, McDonald’s, is still dominant but losing market share to upstarts in the burger business as well as other food categories, most notably Mexican fare. In a recent nationwide study of both Hispanics and non-Hispanics alike, ThinkNow Research took a look at quick service restaurant trends in four main categories:

The most popular of the fast food restaurants, based on at least one visit in the past 12 months, for Hispanics and non-Hispanics alike were not surprising:

Farther down the rankings, there were some real differences. For examples, while 44% of Hispanics have been to a Domino’s at least once in the past 12 months, it dropped to 28% for Whites. Similarly, while 25% of Hispanics enjoyed Carl’s Jr. this past year, only 8% of African Americans went there. Interestingly, the numbers were reversed for Hardee’s (sister company of Carl’s Jr.) – with 20% for African Americans and only 6% for Hispanics.

On a related note, 33% of Hispanics said they ate at McDonald’s at least once a week, though as acculturation levels increased, that number decreased – 35% for low and medium acculturated, dropping to 29% for high acculturated.

Likewise, while 23% said they ate at Subway once a week, it turned out to be 20% for less-acculturated Hispanics, 33% for medium acculturated, dropping to 10% for high-acculturated.

So, which fast food restaurants do Hispanics like most? 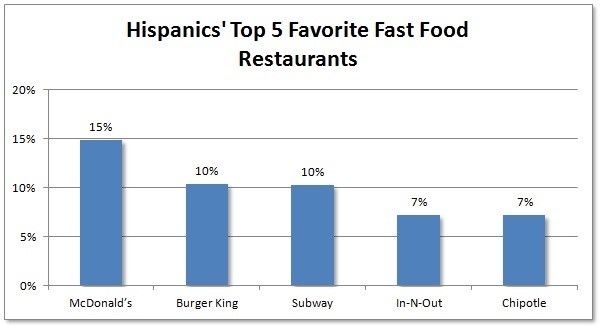 Interestingly, the #1 choice for Asians was Chipotle. Among Hispanics, Chipotle is most popular among the bicultural and those earning $40K or more per year.

This was a clean sweep… all groups selected McDonald’s as offering the most value. And it wasn’t even close, with all 2nd place finishers at least 20-30 percentage points behind.

Another clean sweep… only this time, for Wendy’s – followed not-very-closely by Burger King (#2) and Carl’s Jr. (#3) for Hispanics (and McDonald’s and Burger King for non-Hispanics).

Who’s got the most varied menu? Again, we’ve got some pretty consistent numbers across the groups… 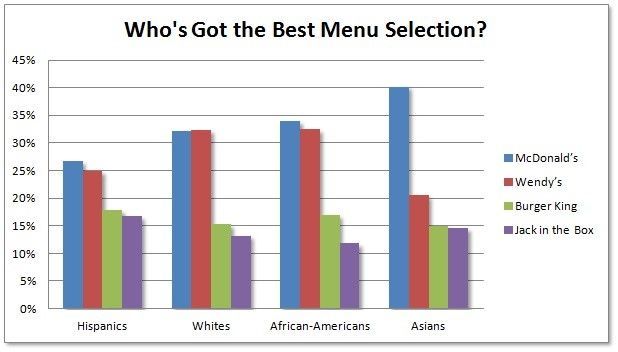 So, what does all this mean?

To paraphrase Mark Twain, “Reports of McDonald’s death have been greatly exaggerated”. There’s no question that Hispanics – in fact, ALL ethnic groups – eat fast food, and in particular at McDonald’s, regularly and often. Companies at the top however, can no longer take their customers for granted. While McDonald’s still holds the #1 spot mostly due to their ubiquitous presence and Value and Selection scores they need to improve their quality considerably as by this measure, they don’t even break the top three among the key Hispanic demo.

For all fast food companies and their ad agencies, the cultural shift in the U.S. is a positive development – as all ethnic groups consider themselves “big fans” of quick meals. We’ve seen terrific culturally targeted advertising… and that needs to continue. But companies also need to “beef up” their understanding of how the groups are changing since low prices and ethnic talent in advertising are no longer enough to ensure continued growth.