For the third year in a row, ThinkNow Research has conducted a nationwide study on how the U.S. Hispanic community feels about the economy, their own financial situation and some of their spending plans. And this year, for the first time, the study also includes other ethnicities – Non-Hispanic Whites, African-Americans and Asian-Americans for a Total Market comparison. This blog and downloadable PowerPoint deck (with the detailed survey results) are a must-read for any business targeting the multicultural populations.

We started by asking survey participants where they thought the U.S. economy would be heading over the next year.

46% of Hispanics said they thought it would be better… a pretty optimistic outlook. Interestingly, within the Hispanic population, the answer was largely driven by their level of acculturation, with 50% of low- and medium-acculturated Hispanics saying “the economy will be better,” but only 35% of the highly-acculturated group feeling that way. This finding is consistent with other work we’ve done on U.S. Hispanics and optimism levels.

When looking at the Total Market, Hispanics were not the most optimistic group. They were tied with Asians, who were way ahead of Non-Hispanic Whites but lagged behind African-Americans. See the chart below… 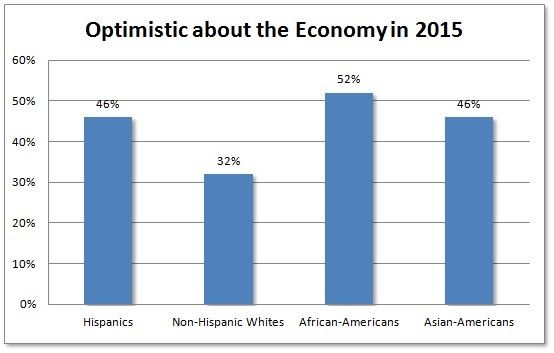 The economy is one thing, but what really matters to most people is what’s happening in their own wallets, pocketbooks and bank accounts. Here, too… Hispanics were very optimistic.

And just like their view of the national economy, their opinion about their own finances is impacted by their level of acculturation. 62% of medium-acculturated Hispanics feel their personal finances will be better in 2015 vs. 56% for low-acculturated and just 44% for the high-acculturated group.

It would seem that the more “Americanized” the person, the worse they feel about their financial future.

If we take a Total Market view of the national economy; 56% of Hispanics are feeling optimistic about their financial prospects in 2015, they still lag behind African-Americans (64%), but are well ahead of Asian-Americans and Non-Hispanic Whites (both at 47%).

Finally, it looks like Hispanics are poised to spend their hard-earned dollars on some fairly big-ticket items in 2015. In fact, more than 1/3 of all those surveyed said they are planning on purchasing at least one of the following: 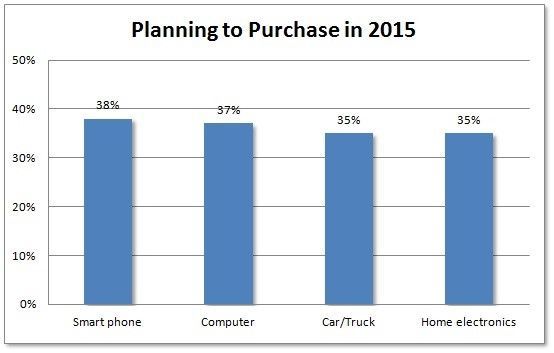 These “planning to purchase” numbers are very consistent with their responses from a year ago.

As we shift to a minority majority country, understanding the opinions, attitudes and desires of the various groups that make up the Total US Market is essential. As the various minority groups grow in numbers their spending drives growth in large sectors of the economy.

If you’re interested in more detailed results on Total Market consumer sentiment for 2015 including detailed breakouts for Hispanics, non-Hispanic Whites, Asians and African Americans download the full report below.