Reports of the Death of Broadcast Have Been Greatly Exaggerated

Over the past 10-15 years we’ve been preparing for the demise of television and the advent of our new digital future where the 30 second ad is dead and all a content is viewed in time-shifted, personally-curated, mobile-screen sized formats.

That train is still headed our way but the fact that the Republican debates last week were the most-watched program in CNN history with 23.1 million viewers adds a bit of perspective to the traditional TV is dead argument. It’s true that some viewers chose to watch the debate via live-stream but that peaked at 921,000 viewers which, while also a record, looks rather paltry next to the traditional TV audience. To better understand what might be going on here I turned to the results from the media, entertainment & technology wave of our Millennial Project research study since we’re told they are the most likely to eschew traditional broadcasting.

Broadcast is Still a Thing

While it’s true that web content consumption is increasing, traditional broadcast is still prominent, even with Millennials. For example: 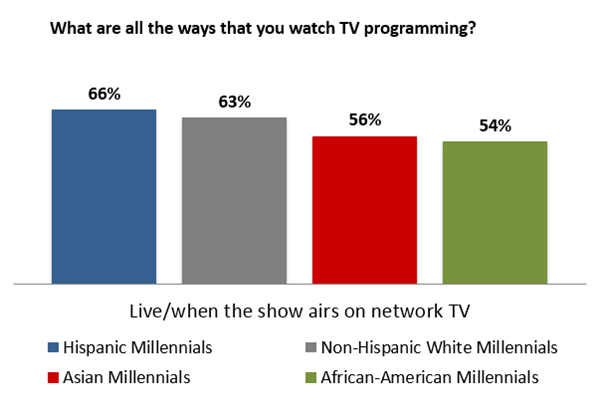 If we run the above chart as an aggregate of all Millennials we see that 62% still watch live broadcast television. That figure increases to 65% among those with household incomes greater than $70K and to 67% among older 25-34 year old Millennials. That said, live television is now primarily competing with Netflix for Millennial eyeballs.

It seems we’re settling into an ecosystem where Netflix and other streaming services are filling the need for targeted content with television dominating the wide audience. Orange is the Black, Transparent, House of Cards, etc. get lots of buzz but they draw niche audiences which skew towards the type of people that write online prognostications of the demise of broadcast. The wider country appears to still like their live TV, thank you very much. Wide appeal content like the NFL, VMA’s, Emmys and Oscars are still best or only available via broadcast or cable.

Among Hispanics Spanish it is Still a Thing

Another mantra I keep hearing is that Spanish language content is dead. I’ve been hearing this for the last 20 years though so I’m a bit skeptical but again let’s turn to the data.

While Hispanic Millennials do skew towards English, it’s important to note that more than half of them consume some or all of their Television content in Spanish. The reason for this appears to be that broadcast is still where a lot of the content they want to see is aired. Additionally, there’s evidence that suggests that Spanish language advertising is better at connecting with bilingual Hispanics so it may also be the better option for advertisers looking to reach Hispanic Millennials.

To be sure, Millennials are spending quite a bit of time online and on streaming services. The fragmented, walled-in nature of streaming, however, makes it nearly impossible to subscribe to every service that has appealing content. For all the buzz that Netflix programming gets, broadcast and cable are still the best places to get a wide array of programming with mass appeal and for the foreseeable future will be the go-to for live events like sports and award shows.