U.S. Hispanics And The Digital Divide - Does It Still Exist?

After reading an article regarding how important Vitamin D from the sun is, I made a New Year’s resolution to take a daily walk around the block here at our office in Burbank. Beyond the mental and physical benefits on my walk I have also been able to talk to people working around the neighborhood in our office as we are lucky to be near a commercial district and a residential district. As a market researcher working in the Hispanic market, I have been taking the opportunity to briefly speak with contractors, gardeners, and day laborers. It is one thing to speak to respondents via a survey, and a whole new experience to speak to them in person. They of course don’t know I’m doing a little market research during our conversations, but how can I resist?

A common theme I weave into conversations regarding the work they are doing is how they access the internet (the segues aren't pretty, but I’m gathering data). I try to get a sense of their internet connectivity at home because it is a question I get asked time and time again by clients, are Hispanics online? More specifically, are Spanish-dominant / non-acculturated Hispanics online?

The short answer to the question is a resounding YES. According to a Pew Research study, the digital divide between Latinos and whites is smaller than what it had been just a few years ago. Between 2009 and 2012, the share of Latino adults who say they go online at least occasionally increased 14 percentage points, rising from 64% to 78%. 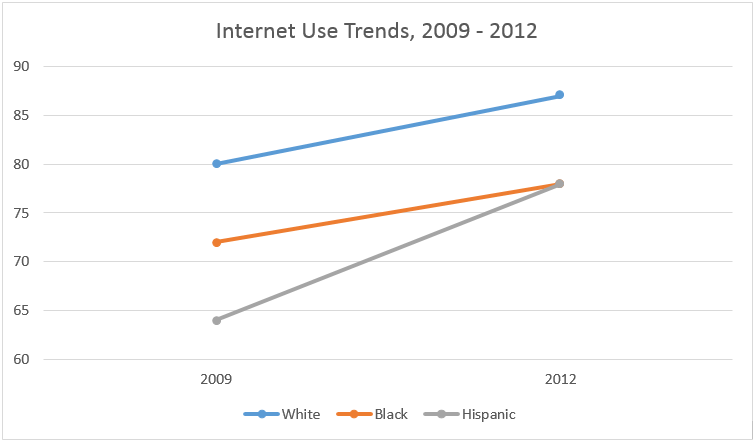 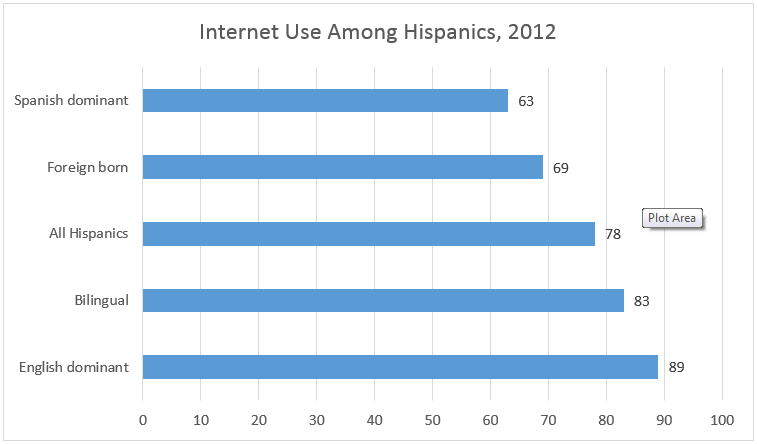 If we take a look at Spanish dominant Hispanics vs. English dominant Hispanics, the gap does look significant, a 26% difference in internet penetration. Yet from the perspective of a market researcher explaining to a marketing team that Hispanic online research is viable, the numbers still point in a positive direction.

This data is consistent with the conversations I've been having with Hispanics that may be perceived to not have internet access, anecdotally and from a data perspective, they do have internet access. Granted there is a gap between English dominant and Spanish dominant in terms of connectivity, but from a statistically significant basis and for market research purposes, the digital divide among U.S. Hispanics is a thing of the past.

If we look at internet penetration in the U.S. as a whole, the glaring disparity isn't prevalent by race, it is by education and income. The quarter of American households still without Internet, not surprisingly, are disproportionately made up of families with less income and education. Of these 25 percent, half say they simply don't want Internet, and about a quarter say it's too expensive.

So the question we should be asking is if my product or service is targeting lower income households, is online viable? Maybe not, but if your product is targeting U.S. Hispanics, online is the way to go.

This blog post was originally published on Total Market Views, where you can view other posts about marketing strategies and ideas from a professional market researcher's perspective.

To find out how we can further benefit your brand, please feel free to contact us.