When I was growing up in Chicago in the 70’s, my parents always had on the Spanish TV station that would eventually become a Univision affiliate. Spanish language TV back then was a pretty informal thing. I recall the ads from that time as being a step or two below what you’ll currently find on, at 2am on your local independent station. A few of the ads had production values but most were simply people standing in front of the camera hawking their wares & services. My dad even went down to the studio and recorded a segment on one of the variety shows, for a car battery additive he was selling at the time. I remember watching him on our black & white television and being mesmerized by the flickering image.

Today, I test television ads for a living & spend most of my time looking at U.S. Hispanic advertising in both English and Spanish. Spanish language ads have come a long way since the 70’s. The bar was raised in the 80’s and 90’s as Univision and Telemundo started delivering national Spanish speaking audiences to advertisers. Initially, ads were translations of their English language counterparts but by the time I started testing ads in the early 2000’s most of the big advertisers were using Hispanic Ad Agencies that created Hispanic market specific campaigns. Hispanic Ad agencies improved the quality of Spanish language ads tremendously because they brought cultural insights into their production. Spanish speakers can spot translated ads immediately because they are stilted. Even though they use native Spanish speaking talent to read the copy, the underlying message is still in English. By conceiving ads in Spanish, Hispanic Ad agencies gave U.S. Hispanics advertising that really spoke to them.

Culture, however, is not static. Since 2000 U.S. Hispanic births started to grow faster than the immigration rate and the percentage of U.S. Hispanic adults who are foreign born is now under 50%. Currently, around 68 percent of U.S. Hispanics speak English well or very well as compared to 59 percent in 2000. 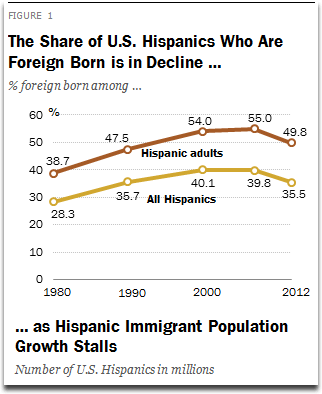 These changes have had a profound impact on U.S. Hispanic culture. It used to be that Spanish language and Hispanic advertising were synonymous.
Bilingual is the new Spanish.

When segmenting Hispanics by media usage, the largest group by far are those that state that they consume media in both languages. Some advertisers have taken this change to mean that they can invest less in Spanish media since they can now reach a larger segment of the U.S. Hispanic audience in English. That, unfortunately is not the case since in advertising the number of impressions or times you see or hear a message matters and half of Hispanic impressions are still found on Spanish language media. Impressions count because we’re hard wired to like things we’re familiar with. This is why we might dislike a song when first hearing it but find ourselves humming along after the 10th time it plays on the radio. Advertising bilingually allows your message to reach that “likeability” threshold faster and more effectively, since research shows that Bilinguals have a greater emotional connection to Spanish language messaging.

This shift towards bilingualism has forced us in the advertising and consumer insights field to change how we work. I spent 10 years testing Spanish language ads among U.S. Hispanics but eventually started testing English language ads among English speaking Hispanics to see how this group responded differently to English language messages vs. non-Hispanics. We now have normative measures for how ads perform with Spanish speaking Hispanics, English speaking Hispanics and English speaking non-Hispanics. This new cultural landscape has motivated some advertisers to look towards Total Market Strategies which aim to identify cultural insights and infuse them into one integrated campaign. Unfortunately, some in the industry have thought of Total Market as a cost saving measure which allows them to ignore Spanish language consumers. Understanding culture at a level that allows for creating a culturally resonant ad is a difficult enough job and making it fit with a Total Market campaign can dilute the insight and intended message. If an advertiser has identified a potent cultural insight, it’s often better to use it in a culturally targeted campaign.

A lot has changed since I first watched those flickering black & white images of Spanish language ads. I still see bad Hispanic advertising from time to time but thankfully it’s now, at a similar rate, as bad as some English language advertising. The current multicultural landscape is complicated. The job of understanding U.S. Hispanic consumers has gotten more difficult, but the advertising research industry has risen to the challenge and we’re excited to be working in this time of disruption and cultural shift.

To find out how we can help you successfully send the intended message to your audience, feel free to contact us.