The results of a recent ThinkNow Research Hispanic Omnibus survey* about the feelings of the Hispanic community toward the US economy show that, in general, Hispanics are not only optimistic about the future… but that they’re going to be opening their wallets to support it, as well.

When asked about their own personal financial situation and how it would fare in the coming year, 51.0% of all respondents said they anticipated in would improve (vs. 2012), with only 9.2% feeling that it would be worse.

That optimism was pretty evenly split across gender lines. However, when it came to age groups, younger Hispanic (18-34) were the most optimistic (with 61% anticipating an improvement in the financial standing), while the oldest group (55+) were the most pessimistic (with 19.7% fearing that their situation would worsen). This age-related trend was consistent across the several categories discussed in the survey.

When asked about specific big-ticket purchases made in 2012 vs. what they plan to buy in 2013, the optimistic trend continued: 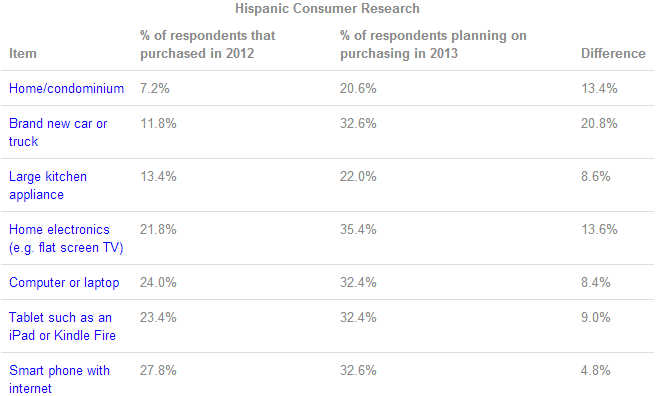 2013 looks to be the year in which Hispanics, the fastest growing segment of the US population, will flex their considerable spending muscle like never before. And to no one’s surprise, the sectors that will benefit the most from the spending infusion are home electronics and personal technology. Advertisers and retailers… are you listening?!
However, there were also some very interesting anomalies that popped-up among the results:

For those planning on purchasing a home or condominium in the coming year, the less-acculturated will be doing most of the buying (24.7%), compared to the highly-acculturated, which will be the smallest buying group (11.7%). Though this parallels the responses to the question about their feelings toward the economy in general, we’re frankly a little surprised by this… and not really sure why but perhaps it’s reflective of pent-up demand.

Beyond their own financial situation, this study also explored Hispanic consumers’ concerns about some broader issues related to the US economy, including the Availability of Jobs, National Budget Deficit, Rising Prices, the Housing Market and Financial Markets. Not surprisingly, the top two areas of concern were the items with the most personal impact – jobs and rising prices.

Interestingly, the least worrisome economic issue, overall, was the Housing Market. We find that interesting, given that more than 20% of respondents planned on purchasing a new home in 2013. Hmmm…

In general, Hispanic consumers appear to be pretty bullish on the economy, as well as on their own financial situation. Let’s hope they’re right.

* This Hispanic market research project was part of the monthly Hispanic Omnibus study conducted by ThinkNow Research; these economic questions were asked in January 2013. The 500 respondents were a representative cross-section of the US Hispanic population as a whole: 50% Male / 50% Female; 40% English / 20% Bilingual / 40% Spanish only; 40% in the West / 35% South / 10% Midwest / 15% Northeast.