A recent survey conducted through the ThinkNow Research monthly Omnibus shows that a significantly higher number of respondents report having healthcare coverage in May 2014 as compared to November 2013. This increase was seen among both Hispanic and non-Hispanic respondents surveyed.

There are some notable differences, however, in terms of where the coverage has come from. While the percentage of non-Hispanics who said they obtained insurance from their jobs increased from 31% to 39% during the six month period, Hispanic job-related coverage decreased a couple percentage points from 42% to 40%. The increase in overall Hispanic coverage appears to be driven by the purchase of individual plans which increased from 13% last year to 17% in May.

Bicultural and highly acculturated Hispanics saw employer based coverage drop -4% and -5% with Medicare and Medicaid staying relatively unchanged. Individual plans for these groups, however, increased +6% for biculturals and +9% for the highly acculturated.

Non-Hispanic Positive Feelings Increasing: When asked how pleased or displeased respondents were with the ACA taking effect, the percentage of Non-Hispanics who said they were somewhat or very pleased increased from 35% in November to 42% in May with most of the increase coming from the “Very Pleased” group which grew from 14% to 21%. Overall Hispanic opinion stayed steady at 50% approval across both waves but there was a decrease in positive opinions among bicultural Hispanics. 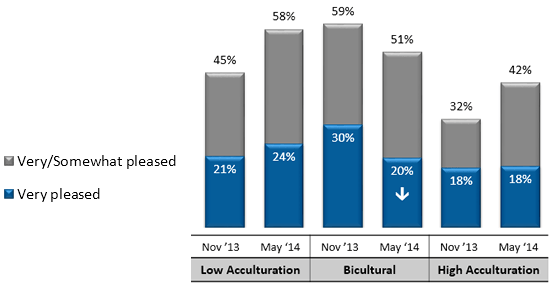 Regardless of whether individuals approve or disapprove of the law the net result appears to be an increasing number of individuals with Health insurance coverage with the largest increase coming from the lower acculturation Hispanic segment. ThinkNow Research is interested in understanding how this influx of new enrollees navigates the healthcare marketplace. Stay tuned for our upcoming Millennials and Healthcare Attitudes report to be released next month for more information.