If you’re wondering what that noise is that you’ve been hearing lately it’s the collective sigh of relief parents have been making as their kids head back to school and out of their hair for the next nine months. Here at ThinkNow Research we heard that sigh and decided to find out a little more about it.
We conducted a survey through our Omnibus Plus™ of Hispanic and non-Hispanic households to see what all the commotion was about.

Turns out Hispanic households are sighing a little louder than others since they have more kids on average. 61% of them said they were going to be doing some back-to-school shopping compared to 50% of non-Hispanics surveyed.

With more kids, however, comes higher spending per household at about $368 for each Hispanic home vs. $330 for non-Hispanic homes. The Hispanic spend represents a 9% increase over last year and 25% increase over 2013. As the economy improves, back-to-school shopping appears to be one of the beneficiaries of extra spending among Hispanics.

Shopping started in June for 10% of consumers, another 40% started in July with fully half waiting until August before starting. Most completed their shopping by the end of August but about 20% of both Hispanics and non-Hispanics plan to finish sometime in September. 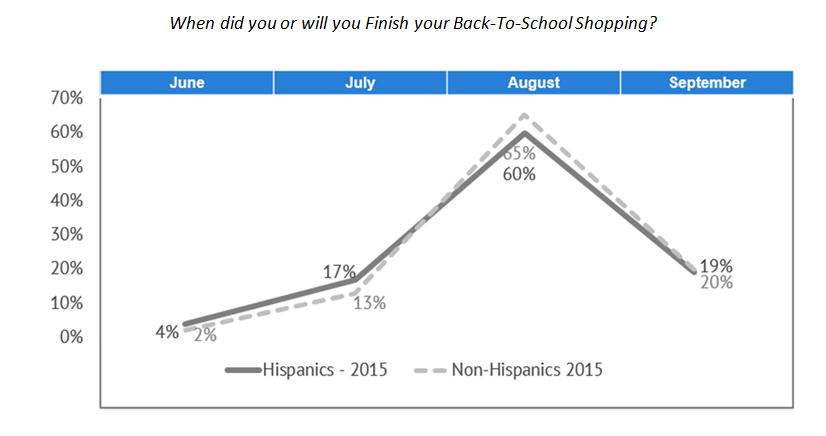 School year calendars vary considerably be region so we see about 18% of the South waiting until September to finish and 25% of the Midwest doing so.

Online shopping has been making inroads in all forms of purchases but it appears Amazon has not yet achieved its mission of total world domination. Some back-to-school categories are resistant to the online siren song. For example, while 40% of electronics purchases have shifted online for both Hispanics and non-Hispanics only about a quarter of shoes and clothes purchases are conducted online for both groups. About a quarter of Hispanics are also likely to use lay-away services for their back-to-school purchases vs. about a fifth of non-Hispanics. Lay-away also has a regional skew with Hispanics in the Northeast being twice as likely to use it than their peers in other parts of the country.

The type of store also matters and we found some difference between Hispanics and non-Hispanics. For example, about 31% of non-Hispanics purchase electronics from office supply stores vs. only 19% of Hispanics turning to them for electronics. However, mass retailers like Walmart and Target dominate school supplies purchases with 70% of both Hispanics and non-Hispanics turning to them for paper, pencils, notebooks, etc. However, since most families shop more than one type of store, about 50% also turn to office supply stores for these types of items and 40% turn to Dollar stores. When looking for shoes and clothes, department stores are still competitive with mass merchants with Hispanics favoring them slightly for those types of purchases and non-Hispanics slightly favoring the mass-merchants.

Whether shopping online or in a physical store back-to-school shopping takes at least three visits. Once those are done, however, we can turn on the television and finally start our vacation from the barrage of summer camps, play dates and constant complaints of boredom. Now, where’s the clicker?