Not Immunizing Children… What Are You Afraid Of?

In an effort to understand parents’ decisions about immunizing their children (or not), ThinkNow Research conducted a nationwide study, comparing the immunization plans of Hispanic families to those of non-Hispanics. While there were some similarities, there were some very interesting differences, too.

When asked, “Did you or do you plan to vaccinate your children against the measles, chicken pox, polio and other common illnesses?”, the response from Hispanics and non-Hispanics was nearly identical – 89% of Hispanics said ‘yes,’ compared to 88% for non-Hispanics. While these high numbers look positive, we need to keep in mind that between 90-95% of the population needs to be vaccinated to prevent the spread of highly contagious diseases like the measles.

So, who’s keeping vaccination rates below 90%? Men. Hispanic men were less likely to say they would vaccinate their kids, 87% vs. 92% for Hispanic women. Non-Hispanic men were even worse with an intent-to-vaccinate rate of 80% vs. 94% for non-Hispanic women. According to the CDC, 95% of U.S. kids have been given the MMR vaccine by the time they reach kindergarten so it would appear that women, thankfully, are winning the vaccination argument.

Income and Geography were also identified as factors that affect intent-to-vaccinate rates. Both Hispanic and non-Hispanic respondents with higher incomes were more likely to vaccinate their children. Geographically, the Midwest had the biggest difference in terms of Hispanic vs. non-Hispanic vaccination rates with 96% of Hispanics stating they would vaccinate and 75% of non-Hispanics stating they would vaccinate in that part of the country. Since vaccination opt-out laws vary by State, the intent to vaccinate does not necessarily correlate with actual vaccination rates. Intent does, however, inform us of where pockets of resistance are highest.

Within the Hispanic community, the level of vaccine acceptance was fairly consistent across all demographics, although bicultural Hispanics were slightly less likely to say they would vaccinate than their low and highly acculturated brethren. 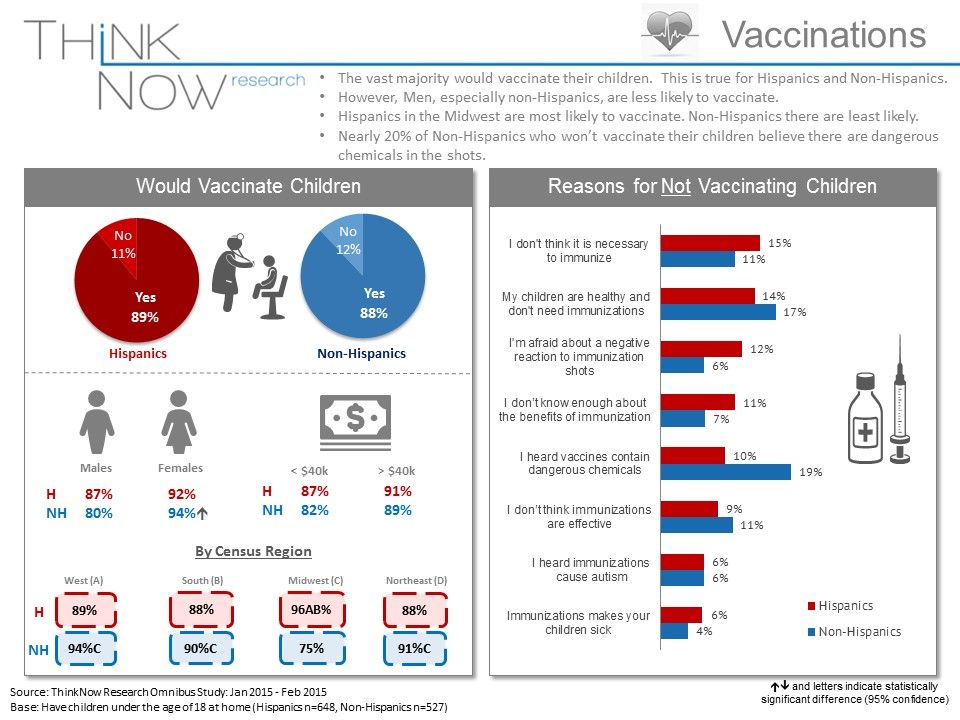 It would appear the vaccine/autism scare is starting to subside with only 6% of Hispanics and non-Hispanics stating that as a reason for not vaccinating. Responses like “I don’t know enough about the benefits of immunization” offer a ray of hope that some of those currently not intending to immunize might be persuaded with better information and outreach. Hispanics, however, were twice as likely as non-Hispanics to say they’re afraid of negative vaccine reactions while non-Hispanics are nearly twice as likely to mention “dangerous chemicals” as a reason not to vaccinate. This would indicate that messaging needs to be tailored to each group to address their fears and concerns. While our current 95% vaccination rate is providing enough herd immunity to limit our current contagious disease outbreaks, dipping below that could have very serious consequences. Knowing where and towards whom to target pro-vaccination messaging is a key step in getting us to a near 100% vaccination rate. That might sound impossible but several countries and some U.S. states have reached 98-99% vaccination rates so we know that with the right information, policies and effort, it can be done.