Many of us have heard of the Hispanic Health Paradox, the fact that U.S. Hispanics live longer and have better healthcare outcomes than non-Hispanic whites even though whites tend to have higher income and education levels which correlate with longer life expectancy. Unfortunately, that paradox does not hold up for cancer. There is no protective benefit in being Hispanic when it comes to cancer. Of particular concern is breast cancer since it is the most commonly diagnosed and leading cause of cancer deaths among Latinas. This statistic is a cause for concern but the more Latinas know about breast cancer prevention, early detection and treatment, the greater likelihood that we will gain the upper hand on this disease.

Therefore, ThinkNow Research is joining Healthy Hispanic Living and its partners, in developing the Latina breast cancer awareness campaign, called “A Passionate Pursuit for Prevention” to cast light on the state of Latina awareness, attitudes and behaviors surrounding breast cancer. We’ve tapped into our database of 35,000 U.S. Hispanics and asked Latinas to tell us what they currently know about the disease and the steps they’re taking to prevent it. This month we’re focusing on issues surrounding breast cancer awareness. In the coming months we’ll be looking at steps Latinas currently take to address the risk of breast cancer as well as possible future steps they are considering. Here is an infographic highlighting some important points we found... 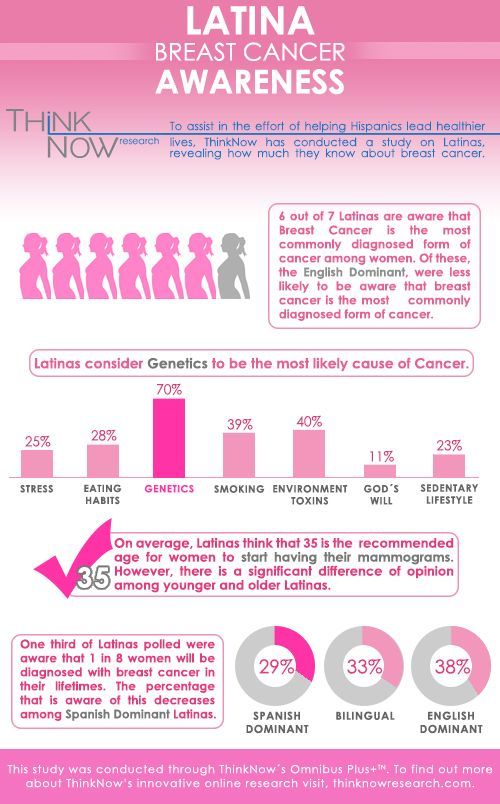 The results are encouraging in some areas and highlight opportunities for education in others. For example, most Latinas, 86%, correctly identify breast cancer as the most commonly diagnosed cancer in women. However, only 33% of Millennial Latinas are concerned about cancer vs. 51% of their non-Hispanic White cohorts. Young Latinas are consistently more concerned with diabetes, heart disease and high blood pressure than cancer. While it’s understandable that Latinas can’t be equally concerned about every disease only a third of them or 34% were aware that 1 in 8 women will be diagnosed with breast cancer in their lifetime. Differences in awareness were even more pronounced when looking at Latinas through an acculturation lens. While 38% of English dominant Latinas were aware of the prevalence of breast cancer among women that figure dropped below 30% for the Spanish dominant. This highlights the need for bilingual educational efforts when reaching this community.

Lastly, while the recommended age for annual or biennial mammograms has been debated in recent years and can vary depending on personal risk factors, an understanding of what message is getting through to Latinas is important and we’ve noted some interesting differences. 37% of Millennial Latinas think that women should begin having mammograms between the ages of 35-45 whereas 61% of older Latinas chose that age range as the appropriate time to start having mammograms. That’s a significant difference of opinion on a matter of considerable importance. It’s gaps in opinion like these that reveal the need for consistent messaging and education when it comes to breast cancer prevention and another reason we’re committed to helping contribute to the Passionate Pursuit of Prevention campaign. Stay tuned to more insights next month when we’ll be looking at steps Latinas currently take to address the risk of breast cancer.